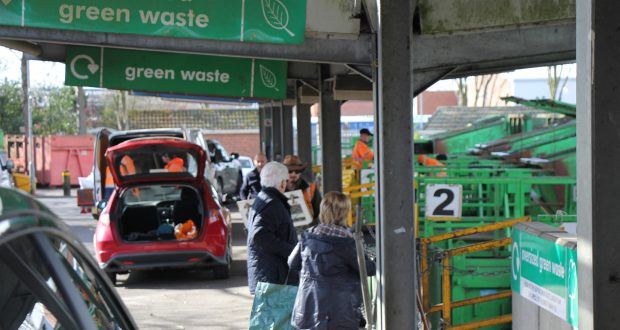 Number plate recognition could be brought in at Lincolnshire’s waste sites including the one in Spalding, as its likely to be too costly to open the doors seven days a week, it’s been claimed.

While the tips have CCTV, Lincolnshire County Council is looking at automatic number plate recognition (ANPR) which could be used to stop others from outside the county using the sites such as the one at West Marsh Road.

The booking system put in place as a social distancing measure is being scrapped from September and the council’s head of waste, Mike Reed was quizzed on the developments surrounding that, at the meeting of the Environment and Economy Scrutiny Committee last week.

Among the questions asked were why the process where businesses have to register to use the sites was continuing?
Mr Reed said it was to stop some using the site wrongly, but that the authority was working on number plate recognition as a possible alternate solution.

“We’re investigating ANPR as a system to replace what we have at the minute with spot checks at the gate,” he said. “In an ideal world we want a situation where all Lincolnshire residents are registered so their number plates are kept on the system.

“With ANPR we could have a gate or barrier system where, if the camera spots a certain registration plate, it can open up to that member of the public and they can access the site.

“That’s something that we are very much looking in to.

“I see it as the way forward as it takes away the staff burden which could be needless a lot of the time.

“We’re very mindful there’s areas coming in from out of the county and disposing their material at Lincolnshire tax payers expense.”

Elsewhere the meeting heard that part of the reasoning for ending the booking system was that people were not turning up for around 15 per cent of the appointments they had booked and Mr Reed said they had also not seen as many using the centres as they thought.

Calls to open the tip seven days a week, up from the five days they’re currently open, look set to be in vain however due to the cost.

Mr Reed continued: “Working seven days a week would be a considerable financial burden and pressure which I don’t think we could realistically meet.

“For staff to be provided to work seven days would be a considerable cost.

“It’s just a case of introducing two more staff on top of five staff because of the hours that can be worked.

“The facilities would also need to be managed, not only on our side but also from the contractor’s side.

“A second issue is the sites need maintenance and repairs and those two days give us an opportunity to address some of the problems which can occur and would be difficult to address if the sites were open to the public.

“Thirdly a lot of the haulage of containers occurs on the two days where the sites are closed. It enables to haulier to access the site unfettered.”

As previously reported, Lincolnshire County Council has said they will close Spalding’s West Marsh Road tip if users queue back on to the A16 in future.