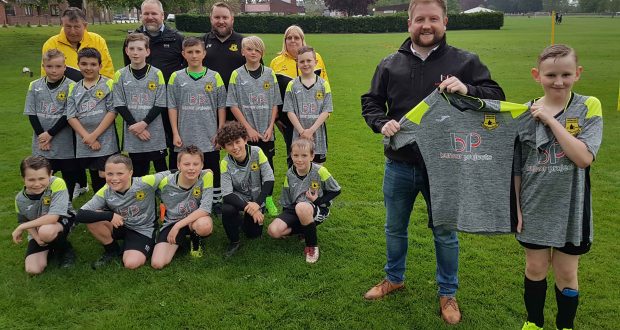 Back in 2019 Burmor Projects managing director Luke Boekestyn presented the kit to player Harley Vernalls and the rest of the then Crowland Juniors Under-12s Black team.

Thieves broke into a van and took tools worth thousands of pounds along with kit belonging to a youth football team.

Owner Jay Vernalls was diagnosed with COVID-19 and returned to his Spalding home last Thursday afternoon and went to bed for two days.

When he was able to get up on Sunday he realised his white Fiesta van, parked on West Parade, had been broken into and all his tools taken along with bags of equipment used by Crowland U-13s who he manages.

“They completely ransacked the van and took everything, including my own football boots,” said Jay.

“Usually I make sure I park with the doors wedged against the wall, but I felt so rough on Thursday that I just parked the van and went to bed. It wasn’t until I got up on Sunday that I realised what had happened,” he added.

Jay was vaccinated two weeks ago, but his immunity wasn’t reached before he caught COVID-19.

Along with a range of power tools, the thieves also took a Swiss Army knife which belonged to Jay’s grandfather and has sentimental value.

“I wish they’d have left that and taken the rest. It’s the only thing I have of my granddad’s,” he said.

The large, red penknife has the initials JV and IWGV scratched into the casing.

Jay, a housing association clerk of works, said nothing in the van would be covered by insurance as the tools were his own, with the exception of one piece.

The haul included a range of power tools and surveying equipment.

The youth team he has managed for eight years held a special fundraiser last year and packed bags in Morrisons to raise money for kit.

“They did really well and raised nearly £1,000 so we had some really good equipment. The bag of balls alone was around £300 and there were two bags of equipment including spare strips and resistance bands for training.”

The team has two sponsors, Burmor Construction and Safe Local Traders, who help each year.

Help from the sporting community has also come in with Hereward Sports and Leisure, of Peterborough, replacing one of the bags and match balls.

A £30 gift voucher came from another club which, said Jay, was totally unexpected as all football clubs were suffering financially.

“We are all feeling it – we haven’t been able to do any fundraising for more than a year and things are really tight,” said Jay, who is married to Charlene and has a two-year-old daughter.

Any information should go to Lincolnshire police on 101.