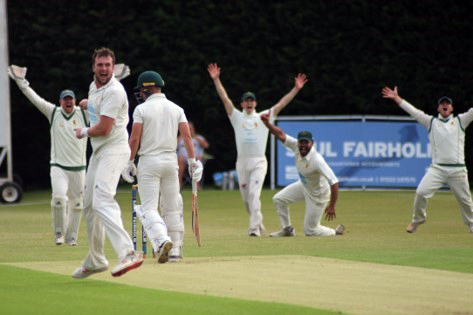 STAR OF THE SHOW: Lincolnshire celebrate one of Alex Willerton's wickets.

Willerton stars as Lincolnshire CCC blow Cumberland away in opener

Lincolnshire CCC began their Eastern Division campaign in fine style as they beat Cumberland by ten wickets at Sleaford.

On winning the toss Cumberland elected to bat first – and before long they were in trouble against Lincolnshire’s opening hostile attack.

In no time the visitors had slumped to 36-6 as Curtis Free and Alex Willerton dismantled their top order.

A stand of 40 for the seventh wicket provided some hope for the visitors, but the introduction of Matt Fowler into the attack shortly before lunch brought the crucial breakthrough, Cumberland reaching 78-7 at the interval.

After lunch short work was made of their lower order as they were dismissed for 90 in the 43rd over. Free (5-29) and Willerton (4-25) were Lincolnshire’s key bowlers.

Lincolnshire’s innings started steadily until they reached 32 when Joe Kendall was dismissed.

Tom Keast and Bilal Shafayat quickly followed and at, 38-3, Cumberland were back in the game.

Azeem Rafiq and Jack Timby steadied the innings before Rafiq was adjudged LBW for 36 with the total on 89-4.

Timby and Dan Freeman took Lincolnshire into the lead and added a vital 60 before the former was dismissed for a patient and valuable 50.

Carl Wilson then joined Freeman and took the score to 208-5 before rain and bad light brought the day’s play to a close, with Freeman 63 not out and Wilson 27 not out.

Lincolnshire also had 32 overs remaining in their first innings.

Day two started in dramatic style, with Lincolnshire losing their last five wickets for a mere 27 runs to leave them on 235, some 145 runs ahead with Freeman top scoring with 74. For Cumberland, Adam Syddall took 6-62.

With rain threatening, Lincolnshire now had to make early inroads into the Cumberland batting.

Shortly before tea Cumberland were dismissed for 168, Willerton taking 6-51 to give him match figures of 10-76.

Lincolnshire reached the 24 required for victory without loss, winning by ten wickets and taking 22 points from the match.

The county club’s next match is also against Cumberland in the Knockout Trophy quarter-final to be held at Bourne CC’s Abbey Lawn home on Sunday (11am start).