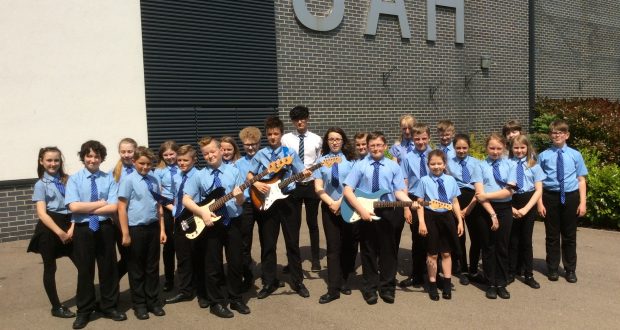 UAH is school of rock

University Academy Holbeach’s first Battle of the Bands was organised by some of its older students.
As part of their BTEC Level 3 Diploma in Music, Edward King and Austin Walker-Hyde had to organise and run a community music project. They decided to work with Year 7 pupils to develop the younger pupils’ knowledge of and skills in rock music.

Pupils from four classes were selected to create bands. Most had little or no experience on the instruments they were learning to play and, as a group, they chose a song, learned how to perform it and rehearsed it with the 6th formers.

The Battle of the Bands was also organised by Year 13 pupils, as part of their course. All four Year 7 bands competed alongside other acts from across the school community.

Friends and family were invited to attend the event, and three expert judges were in attendance. After long deliberations, the judges announced that “4th Demo” had won and Brodie Ferguson, Craig Seth, Gracie Brice and Nyall Wilson were clearly thrilled.

All four Year 7 bands will have their songs recorded and the winners were awarded various prizes, including a golden disc trophy.

Head of music Sam Graper said: “The whole project has gone extremely well. Children are often so keen to learn guitars, drums and piano, but, for various reasons (finances, time etc), don’t get the opportunity.
“This project has shown the pupils what they can accomplish, with hard work and determination and I really hope that the bands will stay together and continue to develop musically.
“I am extremely proud of Edward and Austin for organising another superb event. They worked really well with the pupils and produced an excellent result.
2017-06-02
Nigel Chapman