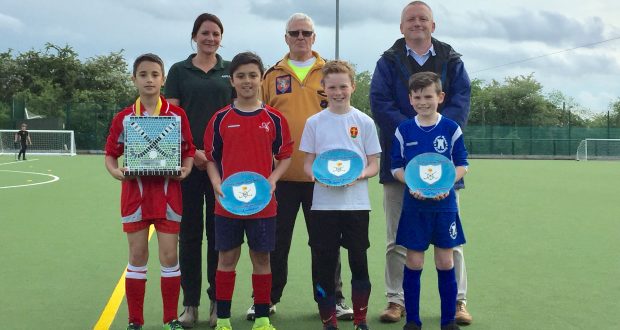 TOP TOURNAMENT: Pictured (back, from left) are Anna Scott, Bill Watt and Andy Dale; front – representatives from John Harrox, Ayscoughfee B, St John's B and Tower Road B.

A host of winners were crowned as the finals of the Spalding Primary Schools Hockey Tournaments were held at Glen Park on Friday.

Some 170 primary school children from 13 local schools took part in the tournament, run in association with Spalding Hockey Club, with teams being divided into four leagues – advanced, intermediate and beginners (A and B) levels.

In the Advanced League, Moulton’s John Harrox were outstanding winners being victorious in all of their four games.

Victories over Ayscoughfee A (4-1), Pinchbeck East A (4-0), Wyberton A (2-0) and St Norbert’s A (3-1) ensured that the trophy returned to Moulton after a gap of two years. John Harrox have now won the main trophy for four of the last six years, with St Norbert’s winning the other two.

Ayscoughfee A came back strongly after their early defeat to John Harrox and their wins over St Norbert’s A (3-2) and Pinchbeck East A (2-1) ensured them of the runners-up slot.

In the Intermediate League, Ayscoughfee B beat a strong Boston Tower Road A team (1-0) and St John’s A (3-2) and held on in a tense draw (1-1) with Pinchbeck East B in their final game to clinch the title.

Given Ayscoughfee’s success in the Advanced League, this shows a great strength in depth at the school.

Beginner League A was another tightly-contested league, with St John’s B and Weston Hills battling it out right to the end.

St John’s opened with a draw (2-2) against John Harrox B before beating Wyberton B (1-0) and St John’s B (3-1). They lost to Weston Hills (1-2) in their closing game but it was just enough to clinch the league on goal difference.

In the Beginner B league, Boston’s Tower Road B team went through undefeated, beating St Norbert’s B (2-1) and Gosberton Academy (2-0) and drawing with Monkshouse B (1-1) and John Harrox C (1-1) to take the title.

There was little to split the chasing pack of John Harrox C, St Norbert’s B and Monkshouse B.

Following the tournament, a special presentation was made to senior umpire Bill Watt by Andy Dale, the regional manager for England Hockey on his retirement.

Watt, who has umpired at all the Primary Schools Tournaments over the last six years, had decided that he would finally hang up his whistle after a long and distinguished career.

The trophies were awarded to the captains of the league winning teams by Anna Scott (tournament sponsors Doodles Pottery Painting) and Andy Dale (regional manager of England Hockey).

Dale rounded off the presentation ceremony with praise for all concerned in running such a great Tournament.

He added that this format is now being put in place by other hockey clubs in his area as a way of promoting the game at junior level.

He was impressed by the overall standard of the players in all leagues and commented that their enthusiasm and commitment was a credit to the game of hockey.