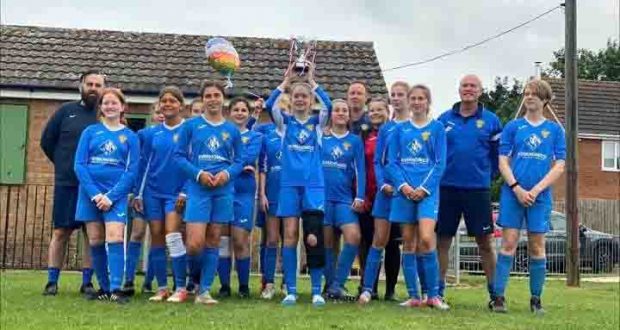 FLAWLESS: Spalding United Youth under-13 girls celebrate with their trophy.

Spalding United Youth under-13 girls are toasting a perfect season after being crowned winners of the Lincolnshire Co-op Women and Girls’ County League.

The girls absolutely bossed the under-13 section of the league, winning all ten of their games and finishing a healthy nine points clear of nearest rivals Long Bennington.

Amazingly, they finished with a goal difference of 60, with Kara Butler top scoring on 31 goals. Isabella Wirkowski (16) and Molli McCormack (14) also managed double figures for the season.

Boss Martyn Cundy said: “It’s only the third season the girls have been together and the majority had never kicked a ball before we started. So it’s a great accomplishment on their part.”