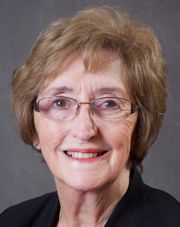 One of South Holland’s most well known political figures has been given an MBE in The Queen’s Birthday Honours List for her voluntary work.

Coun Angela Newton is set for an appearance at Buckingham Palace after being named under her married name of Angela Porter as among those receiving an award.

Among the voluntary groups she’s involved with are Spalding In Bloom, the Spalding Town Husbands Charity, Friends of Spalding Railway Station as well as chairing South Holland Voluntary Car Scheme, the recently set up Spalding Good Neighbours and the Johnson Hospital Community League of Friends.

“I’m just really chuffed,” she said. “I found out just after the election in an email and was just surprised at first.

“I’ve only told (husband) Alan about it and he’s really chuffed.

“There’s hundreds of people out there that are doing volunteering and who do great work in their community, so to get recognised like this with an MBE is brilliant.”

Coun Newton didn’t know that it was former councillor Graham Dark who nominated her for the award.

“I worked with the police for 30 years and also in 25 years of doing voluntary work, I’ve never met a more deserving person,” said Graham who himself was awarded a British Empire Medal (BEM) in 2014. “So many people have approached me over a number of years saying she deserves a medal, so I decided to nominate her.

“She’s been a part of so many voluntary groups, there’s too many too list and in the over 50s group I help out with so many of them have told me stories of how Angela’s helped them in some way or other.

“I can’t think of anyone more deserving.”

As well as those roles already mentioned, Coun Newton is a member of the Welland and the Deepings Drainage Board, previously organised Spalding’s entry for the national In Bloom competition, got involved with Keep Britain Tidy and helped set up the Armed Forces Parade.

On top of her voluntary work, Coun Newton has been elected to South Holland District Council for the last 49 years and is currently leader of the opposition.

She’s also served on Lincolnshire County Council for 21 years having previously been elected to it from 1981 to 1993 before taking a break from there while she was chair of South Holland District Council for two years.

Coun Newton will now be invited to Buckingham Palace to pick up her award though she says due to COVID-19 there’s a backlog of previous winners so it could be a number of months before that happens.

When asked how she’ll celebrate, Coun Newton continued: “I don’t know what we can do at the moment.

“I’ll have to say with what Boris Johnson says next week about restrictions.

“I’ve still not had the party I always organise to thank those who have helped me during the election.”