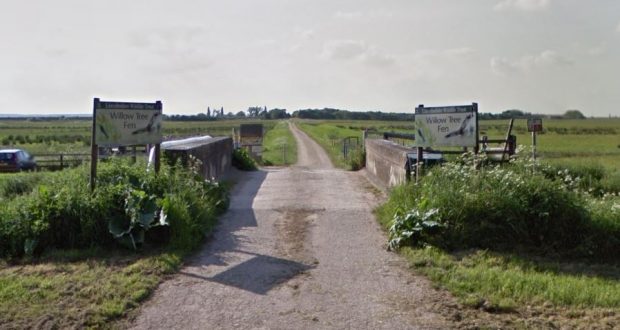 In 2020, cranes returned to breed in the Lincolnshire Fens for the first time in around 400 years. This year, they returned to the Lincolnshire Wildlife Trust’s Willow Tree Fen nature reserve in January and a monitoring scheme was put in place to protect the birds and watch over the breeding activities from a safe distance.

Staff and volunteers were delighted to see that two chicks had hatched this year and both parents were starting to feed the chicks and move the family further from the nest to forage for food. Sadly, that celebration has quickly turned to sadness with the news that both chicks have now perished, believed to be at some point between lunch time on Bank Holiday Monday and the morning of Tuesday May 4.

The cause of the failure is not known but the disappearance of the chicks follows a period of very wet and cold weather over the Bank Holiday weekend and with newly hatched chicks, this, and a lack of available food, may have been the reason. Similarly, young cranes are very vulnerable in their first few weeks and may have fallen victim to a predator.

The Trust’s South Lincolnshire Warden John Oliver said: “Cranes are incredibly rare in the UK and we were delighted to welcome them back to the reserve for the second year in a row. However, it is not unusual for them lose chicks and only about 10-20% of crane chicks actually make it to adulthood.

“Whilst the whole team are incredibly disappointed, we understand that this is not unusual in the grand scheme of things and with such long lived birds, a survival rate of one out of every five chicks is more than enough to sustain the population. We are therefore confident that this is not the end of the story for cranes in Lincolnshire.”

The Lincolnshire Wildlife Trust took the decision to close the reserve in January when the cranes arrived back from their wintering grounds. Willow Tree Fen is not large enough to safely accommodate visitors and cranes during the breeding season. This is because cranes need a large area in which to breed and are very susceptible to disturbance.

Head of Reserves Dave Bromwich said: “Following the loss of the chicks, we have taken the decision to keep the reserve closed for the time being. The adults are still on site and we are hopeful that there is still time for them to make a second breeding attempt. Our team of staff and volunteers will continue to monitor the situation and we will let people know more as soon as we can.”