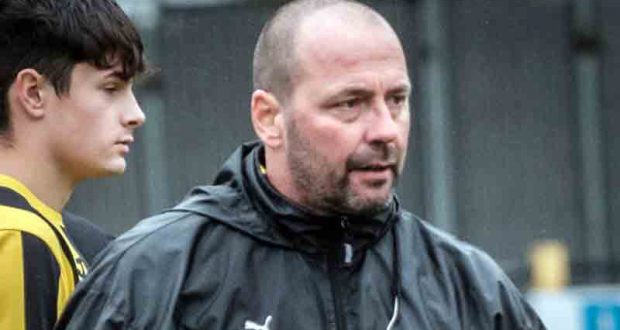 A waterlogged pitch prematurely ended Holbeach United’s game at Shepshed Dynamo just 18 minutes from time on Saturday – and boss Phil Barnes admits his side got the better end of the bargain.

The Tigers were 2-0 down at The Dovecote Stadium as Shepshed’s Liam Canavan (35) and Shay Brennan (51) both found the net, but steady rain from 2pm onwards saw the pitch deteriorate throughout the game.

Holbeach boss Barnes felt that it was getting difficult to play past the hour, with the referee eventually ending proceedings 12 minutes later.

That fell just short of the required number of minutes required to declare the game complete, so the two sides will have to go again at Butthole Lane later in the season.

Barnes was pragmatic about the decision, admitting that he obviously left the ground as the happier of the two managers.

“I saw the forecast before the game and it looked pretty dreadful from 2pm,” said the Holbeach chief. “The pitch was difficult from the off, but it got unplayable in the second half.

“Obviously we got the better deal, being 2-0 down. If I’m sat in the Shepshed dugout, I’d be feeling differently.

“I think the referee made the right call, you just couldn’t pass the ball – he didn’t really have any choice from where I was sitting.

“Shepshed are a good side, but I thought we did quite well in the first half. We gave away a few too many silly free-kicks, though, and that ultimately cost us a goal.

“We will now get another chance to go there and perform a little better later in the season.

“It’s a tough one to take for them and a let-off for us.”