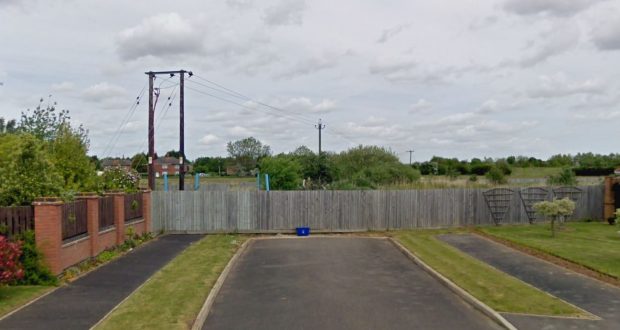 The entrance to the site from Kings Road.

Plans for 185 homes in Holbeach passed

Outline plans to build 185 homes in Holbeach have been given the thumbs up by planners.

The application by Cicero Estates for land off Battlefields Lane South was introduced to South Holland District Council’s Planning Committee last night (Thursday) as an effective renewal of an 185 home application granted permission in January 2018.

There were 68 public objections, including from MP Sir John Hayes, district councillor Tracey Carter and Holbeach Parish Council with worries expressed including over the number of homes, lack of nearby facilities and concerns over flooding, though Anglian Water raised no objections with regards to the latter issue.

The major difference between the application was that it now contained two accesses on to existing roads, one to Kings Road and one to Battlefields Lane South.

Coun Allan Beale asked what measures were being made to stop it being a ‘rat run’.

Planning officer Lucy Buttery responded the authority wasn’t aware of any specific plans, but two exits from the estate was what Lincolnshire County Council’s Highways department had requested to ease traffic on Kings Road.

“There’s been no change in circumstances that mean permission should not be granted again,” she said.

The application was unanimously approved subject to a Section 106 agreement being signed to include an education contribution of £1.1m and £112,100 towards health facilities in Holbeach.

A statement by Cicero’s read out at the meeting, said: “The site is allocated for approximately 185 houses in the local plan. It’s sustainably located in suitable proximity to services which will facilitate sustainable walking and cycling to negate the use of private cars.”