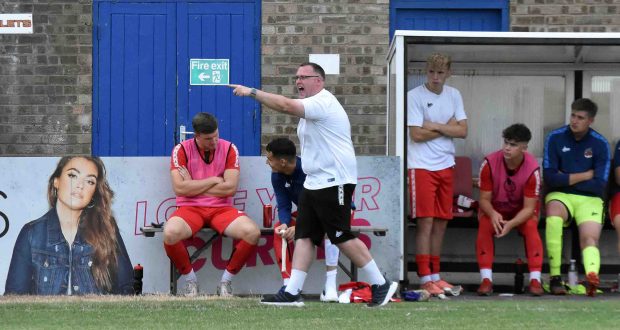 UP FOR THE CUP: Lewis Thorogood during Saturday’ opener. Photo by JAKE WHITELEY

Lewis Thorogood admits that Pinchbeck United are “craving” their first-ever win in the Emirates FA Cup.

The Knights have never won a fixture in a Football Association competition since they became eligible to play in the FA Cup and FA Vase back in 2018.

Standing in their way in this year’s FA Cup are Uhlsport UCL Premier Division North rivals Melton Town in the Extra Preliminary Round at Melton Sports Village on Saturday (3pm).

Boss Thorogood knows that Melton, who beat his side 4-3 and 4-1 last season, are a tough test for his side but is confident they can get a positive result this weekend.

“The FA Cup has been something of a pain for us over the years,” said the Pinchbeck chief. “We’ve just not had that elusive win that we as a club really crave.

“Let’s be honest, for a club like ours, the potential financial benefits of winning FA games are huge.

“But going to Melton won’t be an easy tie at all. Quite the opposite, really.

“They had a winning start to their season and are a very effective side, especially at home.

“What we need to do is go there with absolutely no fear and back ourselves to get a positive result from the game. We’re very capable of doing that.

“As I’ve said, we’re craving an FA Cup win – but the truth is that there is absolutely no pressure on the lads and I’m not going to overwhelm the squad.

“We’ll do our damndest on that day and see what happens.”

Pinchbeck will be hoping to have Avi Vieira fit to start against, having been only fit enough for the bench in Wednesday night’s 2-1 win against Wisbech Town.

Meanwhile, Wisbech have signed attacking duo Pat Kacirek and Kyle Onyon from the Knights, with both playing in their 1-0 win over AFC Mansfield last Saturday.