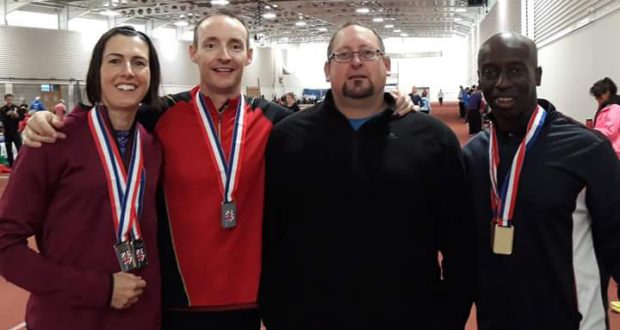 The scene of the raid was the British Masters Athletics Federation Championship at the Alexandria Stadium – and the Smith family were amongst the prolific plunderers.

Smith’s husband Julian was also determined not to go home empty handed and, despite finishing just outside the medals in the 100m and 200m sprints, he battled his way to silver in the over-45 400m with a time of 56.31secs.

Ricky Huskisson picked up two medals on the track, one of which was gold.

Both times were season’s bests for the 58-year-old local legend.

Meanwhile, Simon Achurch won the over-40 hammer with a throw of 43.51m.

He ended up travelling home with a mighty four medals after picking up bronze in the discus, javelin and weighted throw with distances of 33.91m, 41.53m and 11.18m respectively.

Fellow Harrier John Spriggs was delighted to win his first medal at this level, taking bronze in the over-65 triple jump with a 7.82m leap.

This made up for the disappointment of the long jump, where he finished one place away from the medals.

Elsewhere, Tim Needham and John Blackwell came up against some stiff competition, with Needham placing seventh in the over-65 discus and sixth in the hammer event.
Blackwell finished ninth in both events.

Hazel Gerring could count herself unlucky to come away from the meeting without a medal after taking fourth place in the over-45 discus and fifth position in the hammer and shot.