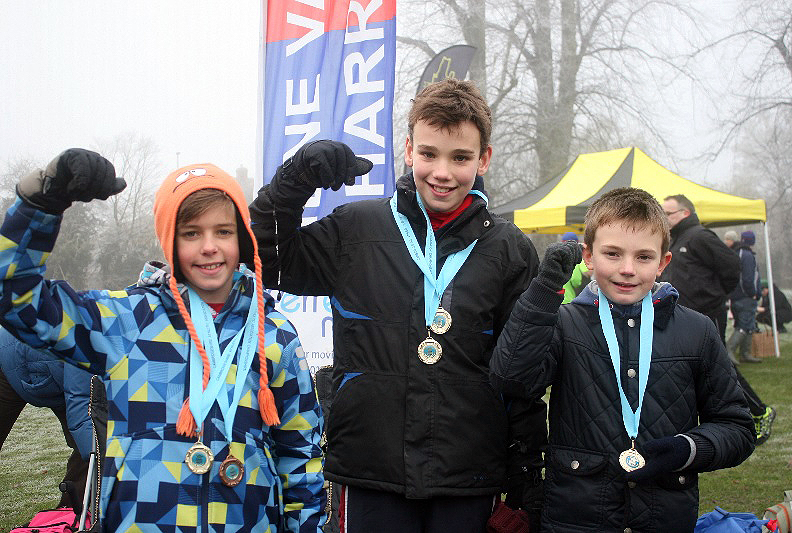 Nene Valley Harriers punch above their weight yet again

Freezing, icy weather and frosty, hard terrain underfoot did nothing to deter scores of Nene Valley Harriers’ finest athletes from battling the conditions at the Cambridgeshire Cross Country Championships.

The Harriers came away with one of the biggest medal hauls of all the teams competing at St Neots, with three individual winners and ten other team or podium medal winners ensuring that the relatively small club still punches well above its weight when it comes to the big stage.

Sam Hughes started the day’s proceedings by winning the under-11s boys’ race, and leading his team home to a gold medal.

Not to be outdone by her male team-mates, Flo Brill duly took the under-11 girls’ race by a massive 38-second margin, with clubmate Alicja Gawronski fighting hard for her 14th position.

Continuing the club’s excellent start to the championships, Amelia Monaghan took the gold medal in the under-13 girls’ race, and, with strong support from Katie Tasker in ninth and Eden Oldfield in 17th, she also led them home to a silver team medal.

Megan Williams was just one position behind Oldfield, proving the club’s strength in depth.

Ellie Piccaver, Josephine Fortune and Imogen Woodward were the scoring trio for the under-15 girls’ silver medal winning team, with Ollvar Ozkan and Chloe Squires putting all their energy into placing well in a competitive field.

Oliver Oakley was the top finisher for the Harriers in the under-15 boys’ race in 12th place, with Mapecho Mukutuma less than a minute behind in 15th.

Relatively new to the club – but already leading his new team home to a silver medal – Jevan Robertson excelled to finish fifth in the under-17 boys’ race.

Oliver Bowling placed just two positions behind, and, with strong runs also coming from Dan Corrigan, Jack Weddup and Ben Harding, the boys did well to hold off some very strong opposition.

The under-17 girls’ race saw Beth Goymour, Jasmine Oldfield, Elisha Reid and Annie Grey give their all for the club.

In the senior men’s event, following on from his excellent fifth place in the last Frostbite League race, Rhys Goddard finished first for the club once again when placing 16th against many more experienced cross country athletes, including Great Britain under-20 international Kieran Wood from Cambridge and Coleridge, who clinched the bronze medal.

Goddard was followed home by Rob Prady just one place behind, and coach and seasoned veteran Sean Beard in 23rd. Sam Hunt was never far behind in 29th to help the men take the silver team medal.

Also relatively new to the club, under-20 triathlete Kayleigh Adams led the Harriers home in the senior women’s race in an excellent ninth place, with fast-improving Sophie Wilkinson-Hargate and returning-to-form Nicky Morgan also having strong races to finish in 14th and 15th position respectively.