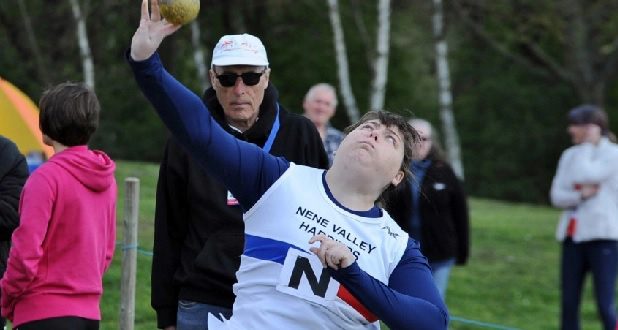 As a partially sighted athlete, Church competes in the F12 disability category, as well as starring for Nene Valley’s track and field league teams.

Her goal is to represent Great Britain in the 2020 Paralympics and her winning performance at the Handisport Open will not have escaped the eyes of the selectors.

The event forms part of the World Para Athletics Grand Prix which has fixtures in such far away places as São Paulo and Beijing.

Up against some of the world’s best, Church was lying in fourth place until the final round when she launched a massive throw of 11.85m to beat her main rival, the Russian world number three, Sofia Oksam by just six centimetres.

Church said: “It was very hot in Paris and my throws were not going to plan. My coach told me to stay relaxed, and so that’s what I did.

“It worked on my last throw, the winning throw of the competition. I really enjoyed myself and British Athletics were amazing at looking after me.”

Church returns to action on Sunday when she will be in the Nene Valley team contesting the East Anglian League track and field final at Bury St Edmunds.

Capes, who has been beaten only once this season, threw a new PB of 15.46m to take the top step on the podium.

Brandon Ballard also found himself amongst the medals taking silver in the disability 1,500m with a time of 5.07.08mins.

It is Kong’s first year in this age group and he was up against athletes a year older than him.

Meanwhile, Elizabeth Moorhouse threw the shot 12.96m for fifth place in the under-17 event, while Joe Purbrick and Freddie Fraser finished fourth and sixth respectively in the under-17 100m hurdles with times of 13.10secs and 13.26secs.

Team-mate Flo Brill clocked 2.20.91mins for seventh place in her under-17 800m heat, while Katie Calcutt ran a time of 11.91secs to make the under-17 80m hurdles final in which she finished seveth.