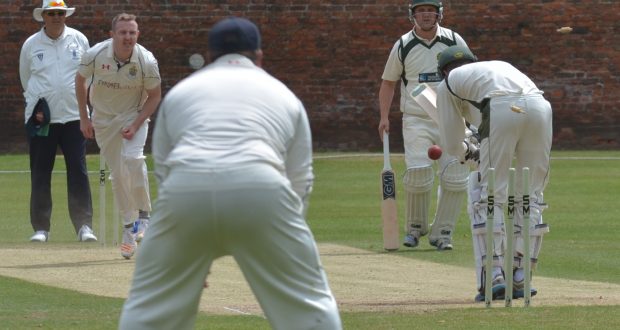 Spalding Town slipped to the bottom of the Lincs Premier League table after losing their crunch clash with relegation rivals Boston on Saturday.
Rob Ambrose’s side saw themselves leapfrogged by the Mayflower men after suffering a 70-run reverse at Spalding Grammar School.
The defeat means Spalding now face a must-win clash with fellow strugglers Market Deeping on Saturday as just five points separate the bottom three sides with two teams relegated back to the South Lincs and Border League at the end of the season.
Boston had elected to bat first after winning the toss, but struggled to break free from the early Spalding shackles.
Opener Tom Poole was bowled by Jonny Miles with the score on only 14 and the Spalding bowler repeated the feat to claim the scalp of Ricky Lovelace after he had made 20.
Miles then struck again to dismiss South African Daniel Sincuba and Boston were reeling at 47-3.
However, Fayadh Haffejee was next to the crease to join dangerman Jonny Cheer who was unbeaten on 16.
They slowly started to rebuild the Boston innings with some patient batting before exploding into life in the latter stages.
They shared a superb stand of 208 as Boston went on to record their highest score of the season.
Cheer cracked 20 fours and six sixes in an unbeaten 160 while Haffejee provided valuable support by plundering eight fours and two sixes in his 76.
He was eventually dismissed by former Boston player Dan Milgate as Michael Musson (12no) then joined Cheer to steer Boston to a daunting 284-4 from their 50 overs.
Miles was the pick of the Spalding bowlers with 3-26 from his 14 overs while Roy Tilley only went for 38 from his 14-over spell.
Spalding needed a strong start in their reply, but were a wicket down after just six balls when Faisal Javed was run out by Sincuba.
Warren Nel followed soon after for just six and then Luke Hollingworth went for nine to leave Spalding struggling on 20-3.
A 49-run partnership between Chris Dring and Miles steadied the Spalding ship until the former became the first of Boston skipper Tom Baxter’s four wickets after making 20.
Ben Smith and Miles continued the revival with a 55-run partnership until Miles was run out by ex-Long Sutton player Paul Deans for Spalding’s top score of 55.
Smith was then snared by the safe hands of Tim Bell off the bowling of Baxter for 53 as Spalding started to fall behind the run rate.
Milgate weighed in with 32 before being run out by Baxter who then quickly picked up the wickets of Josh Manton and Josh Lawrence as Spalding finished their innings on 214-9.
2017-06-28
James Bedford