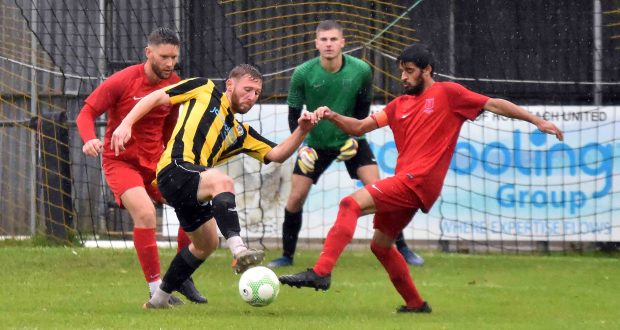 BATTLE IN THE RAIN: Luke Wilson in action from Holbeach's 2-0 loss on Saturday. Photo by JAKE WHITELEY

The Tigers put up a strong fight amid heavy rain at Carter’s Park, but strikes from William Mansfield (58) and James Spruce (77) handed the hosts a sixth loss from eight league games this season.

In what turned out to be the final straw for boss Phil Barnes, who resigned in the aftermath (see story here), Holbeach remain in the bottom two after the defeat.

Barnes said: “The conditions obviously made it hard for both sides.

“We were in the game for long periods and all of the lads put in maximum effort.

“Luke Wilson had a good chance at 0-0 and Aaron Eyett perhaps should had scored at 1-0 – which would have given us a boost.

“Both of their goals were deflected, which about sums our luck up this season.”

Holbeach handed a start to 51-year-old Kevin Cross in goal, while the on-loan Jack Keeble also featured in the defeat.