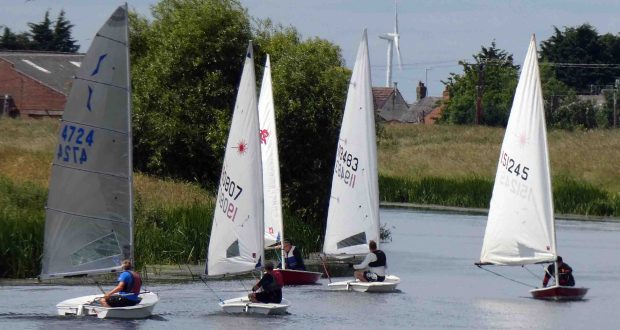 CLOSE CONTEST: Action from one of the Pursuit Series races on Sunday.

Gail Follington is celebrating after a double victory secured overall glory in Welland Yacht Club’s Pursuit Series over the weekend.

Sunday saw the conclusion of the Pursuit Series in the first two races of the day, as well as race five of the six-round Afternoon Points Series later on.

The conditions were not favourable throughout the day, with light winds both variable in strength and direction testing the patience and the ability of the sailors.

First up was the fifth race in the Pursuit Series, which sees boats of different classes given individual timed starts over a 50-minute duration – and their positions at that time determines the finishing order.

First away was Follington in her comet, who knew she was in with a chance of a series win.

Next away some four minutes later was the Alan Cox and Richard Steadman (laser radial), followed by Mark Scourfield (solo) and Clive Herd crewed by Natalia Zin-Safianowicz (graduate) and then Mark Holland and Richard Holland in the full rig lasers.

The course was a reach away from the clubhouse towards the number four buoy, which gave the sailors a taste of all points of sailing over its duration.

At the front, Follington stretched out a lead that was not going to be threatened, while Scourfield had passed the laser radials and was chased down by the larger laser rig of Holland.

Holland then passed Scourfield on the second lap and the top three remained in this order at the end of the race, with Cox in fourth place after a close race with Herd.

The final race of the series was next up, using the same format but with a course change as the wind was becoming more variable.

Follington again showed a clean pair of heels to the rest of the fleet and was never thretened, while the remainder of the fleet experienced numerous place changes in the challenging wind conditions.

At the end of the race time it was Follington who had won her second race of the day, from Scourfield – who had a close race with Herd – in second and third places respectively.

The double success ensured that Follington won the series from Andy Prior by a narrow one-point margin.

Six boats then took to the water for the final race of the day in the Afternoon Points Series. With a usual start applied this time, there was close competition for the right line.

It was Scourfield who timed his start right and he led from the start on a course that had again been changed as the wind seemed to drop further and became more variable.

The chasing pack of Herd, Cox, Stedman and Mark Holland all changed places at one time or other, which made for some gains and losses very quickly.

By the end of the race it was Herd who had drawn away in the final 100 yards, from Cox in second, Scourfield back in third, Steadman in fourth and Mark Holland in fifth.

However, with Herd forced to retire from the race as a result of an earlier infringement and after handicaps were applied it was Scourfield who was declared the winner, followed by Stedman – who beat Cox by only one second on the corrected time.

Anyone wanting to find out more about sailing should contact the club via email secretary@wellandyachtclub.co.uk