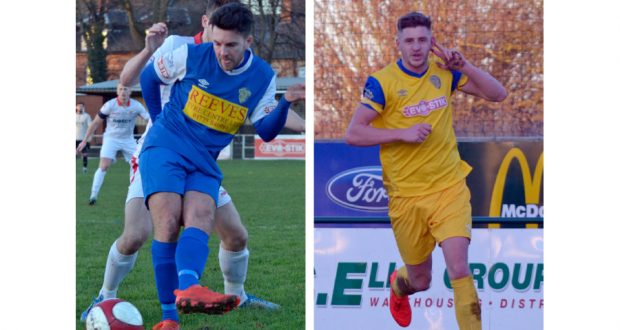 They did it despite losing central defender Neal Spafford to a straight red card on 48 minutes – and then going behind to a David Kolodynski strike just four minutes later.

The Tulips’ response was swift, with Bradley Wells levelling the scores with a free far-post header on 59 minutes and then substitute Bradley Barraclough getting his head to a 66th-minute free kick to net his first goal for the club.

Both goals were teed-up by set piece deliveries from the excellent Lee Beeson, who was named as man-of-the match.

Spalding boss Dave Frecklington admitted his side had been poor in the first half, but was happy to take home three points.

“To be fair Rugby totally dominated the first 45 minutes,” said the Tulips chief. “They out-fought us, passed the ball better and got to everything first.

“They hit the bar with a free kick and gave us as tough a game as anyone, so we had to change for the second period.”

Unfortunately this was not taken advantage of with the 172 supporters having to endure a largely, long ball, scrappy affair.

As Frecklington said, the better play was provided by the home team – who played far better than their low league position would suggest.

They were close to taking a 20th-minute lead with Trey Braithwaite’s free kick from just outside the area clipping the top of the Tulips’ bar.

Spalding’s best effort came from Adam Jackson’s 25-yard drive following a couple of long throws by Matt Varley, but it whistled inches wide of the target.

There was a distinct and welcome change to the quality of play after the break, and following the dismissal of Spafford for an altercation with Kolodynski.

Indeed, within minutes the Rugby playmaker had put his team ahead with a close range finish.

However, the depleted Tulips responded superbly.

Skipper Nathan Stainfield, again in super form, forced a good save from home keeper Dan Jezeph, before Wells levelled the scores from a perfectly delivered corner kick by Beeson.

Six minutes later Barraclough, who had replaced the injured Varley immediately after the interval, put the Tulips ahead when he buried a free header from another Beeson assist.

Despite a determined fight-back by the home team the ten-man Tulips showed enough quality to hold off their challenge and return home from Warwickshire with three more points safely added to their league tally.