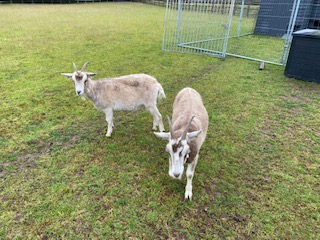 A family who’ve saved several animals from the slaughterhouse were left distraught this morning after they found one of their pet goats had been decapitated.

Stuart and Rachel Roberts made the horrific discovery this morning at the Rangell Gate home near Low Fulney where they keep a number of animals.

After Stuart found a pool of blood, the severed head of their pet goat Mabel was found moments later by Rachel in a dyke.

“It’s horrible and I can’t understand why anybody would do anything like this,” Stuart told The Voice. “I’d started work at 6.45pm and wondered where one of the goats was but thought it must be in the shed

“About 90 minutes later I was having a wander around the chicken enclosure and then found a beer can, then what appeared to be a knife handle and then, three or four thought away a large pool of blood.

“My first thought was to see who was missing and I couldn’t see one of the goats.

“I straight away got my wife up and rang the police.

“We went back out to look for the missing goat when I saw Rachel look over into the ditch and then heard her screaming.

“She’d found the head, but we’ve still no idea where the body is.”

Mabel was one of two goats the Roberts’ had. They also have four pigs, six sheep and 40 chickens at their home.

The collection started just over a year ago when the pair offered to look after four sheep on their land before they went to the slaughterhouse.

Rachel loved having them so much the pair bought them and since then they’ve been offered the other animals rather than be killed, including Mabel and their other goat Ethel who they received as 12-week-olds last August..

They, and 15-year-old son Charlie, look after them at the home where they also run their distribution business from.

“The animals are our pets and they’re Rachel’s babies,” continued Stuart. “We loved having the sheep and it’s just continued on from there.”

Stuart is also now concerned that whoever killed the goat may have injured a lamb last Friday.

“I had to contact a vet then because it looked as if someone had just gone up and stabbed it,” he said. “We put it down to the goat, but the vet at the time said that in 35-years he’d never seen a goat cause so much damage.”

Lincolnshire Police would like to hear from anyone who may hive information.

A spokesman for the force, said: “We received a call at 8.46am today (July 30) reporting that a female goat was believed to have been killed at an address on Rangell Gate, Low Fulney, Spalding.

“This is believed to have happened between 9pm last night and 8.30am today.

“We are investigating this incident and anyone with information should call 101 quoting Incident 83 of July 30.”