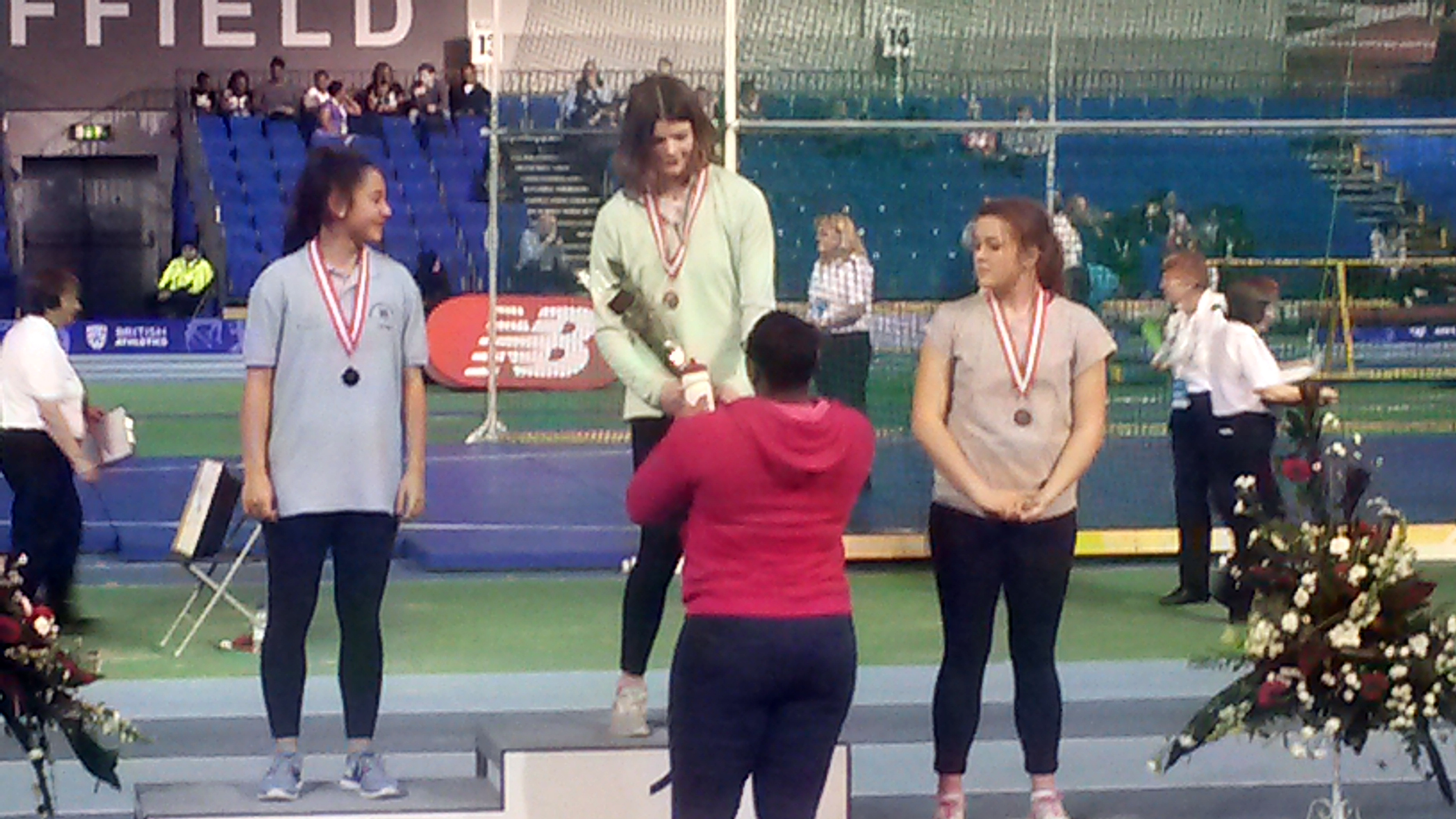 Some nine athletes competed for the Harriers in Sheffield, which showcased events in the under-15, under-17 and under-20 categories.

Over the weekend, the club had four athletes make the semi-finals, while three indoor club records were broken, an amazing four indoor personal bests (PB) times were clocked and two all-time best performances were registered – demonstrating that the club is in safe hands for the future.

But the highlight saw Lincolnshire-based Hannah Molyneaux, who is coached by South Holland legend Geoff Capes, win the under-15 girls’ shot put title to add to her first northern title.
Molyneaux’s family moved to the area recently after Capes agreed that he would coach their daughter.

Although her put of 12.69m was not one of her best throws this year, it was still technically good and was of sufficient distance to win the title.

In the under-20 men’s 400m heats, Ash Sandall and Ollie Dilloway qualified for the semi-finals in second and third place respectively, with times of 49.38secs and 51.63secs in the heats. Dilloway’s time in that heat was an all-time fastest time for him.

In the semi-finals they were drawn against each other, with a very tough qualifying requirement of the winner plus fastest losers.

Sandall’s semi-final third place performance of 49.7secs was just insufficient as he missed out on the final by just one place. Dilloway, meanwhile, felt his performance in the heats and finished fifth in the same race with a time of 51.8secs after tiring in the later stages.

Elsewhere, James McCrae was in the under-20 men’s 1,500m final – and despite being in the leading group for the first half of the race, he was left when the eventual winner took the lead and picked up the pace with 600m to go.

McCrae dug in deep and dipped under the four minute mark for the first time in his career. His time of 3.59.91mins is a club indoor record and a big step in the young gun’s career.

In the 60m heats, club records seemed to be the target of the day with Nathan Pickering running 7.71secs in the under-15 boys to shatter the club best and qualify for the semi-final in third place.

In the under 20 heats, Kane Wright then repeated the feat by winning his heat, literally from the gun, coming out of the blocks far quicker than his competition and running a club record of 6.94secs.

Unfortunately it was Wright’s start in the semi which led to him just running it in after getting it totally wrong.

Pickering also glided over the line after being in the reckoning, but at the 40m mark his strength failed him and he just ‘ran it in’. Despite easing off he did run a time of 7.78secs, which was annoying as he realised he could have smashed his best time.

Meanwhile, Jasmine Allen competed in the under-15 girls’ 200m heats on Sunday – an event which saw all but two of the qualifiers for the semi-finals run times which would have individually qualified for the under-17 ladies’ semi-final.

She was in a tough heat with three previous medal, winners including the winner of the 60m on Saturday.

Allen was disappointed to finish fourth, but that turned into a smile when she found out that she had run an indoor club record time of 27.25secs.

In the under-20 ladies’ long jump, Emma Hornsby recorded a distance of 5.32m.

Unfortunately, she has been a little out of practice for this event over the winter and just started to get into top form when her jumps came to an end.