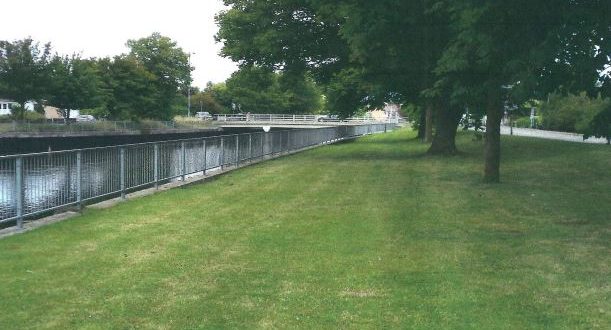 Where PEDALS would like a new path to be built to link it up with the byway that runs alongside the New River (pictured below).

Call for path to link Spalding business park and Cowbit

A Spalding cycling group is looking to create a new path to help people get more easily to KFC, Taco Bell and Cowbit.

Action group PEDALS is looking to create the New River pathway from the Little London Bridge and linking up with the Lincs Gateway Business Park.

The majority of the proposed route would be along existing farm tracks alongside the New River, a drain which runs adjacent to the River Welland.

A new path would have to be created for the 220m between Little London Bridge and where the track starts at Locks Mill Bridge, the base of the Spalding Water Taxi.

PEDALS is also calling for the track to be resurfaced and work to be done along the A1175 to provide a walkway from where the track comes out to the roundabout where KFC and Taco Bell are about to open.

The group’s John Honnor was the main man behind the proposal which states: “The existing roads B1173 (Cowbit Road) and A16 are very busy with narrow verges and no footpaths.

“Cycling, and indeed walking, is dangerous.

“A cycle link is most desirable and can be easily achieved by using existing bridleways which will provide a traffic free route.”

PEDALS chairman David Jones said the group would take it to the local county councillors and also hope to present it to officers.

“It’s a brilliant idea,” he said. “It’s not going to cost all that much given it’s mostly byways that are already there.

“There’s certainly plenty of land alongside the River Welland to link the byway to the footpath at Little London Bridge.

“It would provide a lovely, traffic-free way from Spalding to the business park and to Cowbit and beyond.”