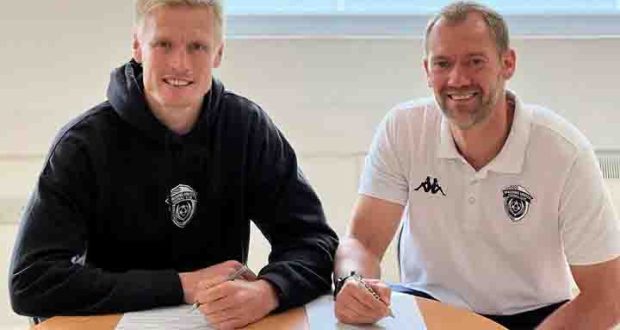 STAYING PUT: Nathan Stainfield (left) and Brett Whaley have signed forms for next season. Photo courtesy of @SpaldingUnited on Twitter.

Spalding United have received a big double boost ahead of the new Pitching In NPL Midlands Division after manager Brett Whaley and star defender Nathan Stainfield penned deals at the club.

Whaley, who joined the club from Wisbech Town mid-season, has committed himself to what will be his first full campaign in the Sir Halley Stewart Playing Field hot-seat.

Central defender Stainfield was voted supporters’ player of the season after rejoining the club last summer and has confirmed that he’ll have another year in blue.

“We’re an ambitious club with ambitious targets and we’ll make sure we’re ready.”
Stainfield added: “I’m proud and excited to have signed for a place that feels like my second home.

“It’s no secret that I’m very fond of the football club and have lots of great memories here so I am delighted to be given the chance to compete in the new season for the Tulips.”

One player that won’t remain at the club next season is striker Gregg Smith.

The hitman, who was another popular figure with Tulips’ fans, confirmed that he’s leaving Spalding with a post on social networking site Twitter.

He posted: “My time at Spalding United is finished. Thanks to Brett and the lads, (the club has) top fans that have been class all season from start to finish.”