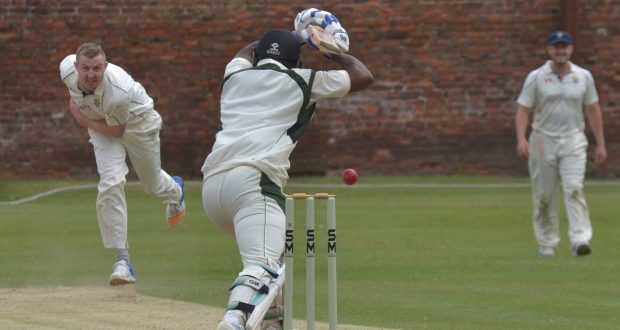 Skipper Jonathan Miles wants to see Spalding Town bounce back from their first defeat of the season when they visit Skegness on Saturday (1pm).

Town suffered a surprise home loss against Grantham 2nd last weekend to end their run of five wins from as many games (see page 38), but remain top of the early-season South Lincs and Border League Premier Division standings.

Miles, who tasted his first reverse as captain, admits that his side had “an off day” at Spalding Grammar School last time out – but is refusing to get too carried away with the five-wicket reverse.

“We deserved to lose against Grantham,” conceded Miles. “We can’t blame the weather or anything like that, sometimes the opposition are just better than you.

“It was disappointing, sure. But if you don’t perform in this league, other teams will punish you.

“Grantham maybe had 20 or 30 runs more than they should have and then none of our top order managed to make a score.

“In truth, too many people had off days and we paid the price for that.”

“It’s probably a much-needed reality check for us, as I don’t think anybody really imagined that we’d keep winning every game.

“We’ve got a young side and we know that it’ll be hard to be consistent all the time.

“It’s a learning curve for us and I’m now looking forward to seeing how we bounce back.”

Having put the loss behind him, Miles now wants to see what Spalding are made of as they begin a run of three tricky away games on the trot.

Saturday’s showdown was a Lincs ECB Premier Division fixture not so long ago and Miles feels like it’s a chance for Town to show their mettle.

He added: “Skegness won’t be easy for us next. They had a strong side last season and are tough to beat at their ground. I’m expecting them to be up for the game and we’ll have to be back to something like our best if we want to get back to winning ways.

“We’re lucky to have Johnny Gardner back in the squad, who will add another much-needed seam option to our ranks. We’ve also got Will Naylor playing himself back into form. He’s new to the team, but just needs a bit more luck and the wickets will start coming.

“We’ve had a strong start to the season. Nobody here was getting carried away when we were winning games, so we’ll not go overboard about our first defeat.

“We’ll keep our composure and bid to bounce back in the best way possible.”

Also in the South Lincs and Border League’s top flight, Long Sutton return to action with a trip to Freiston on Saturday (1pm).

Fifth-placed Sutton go into the fixture 13 points behind their fourth-placed hosts and will be bidding to end a run of two defeats on the bounce.