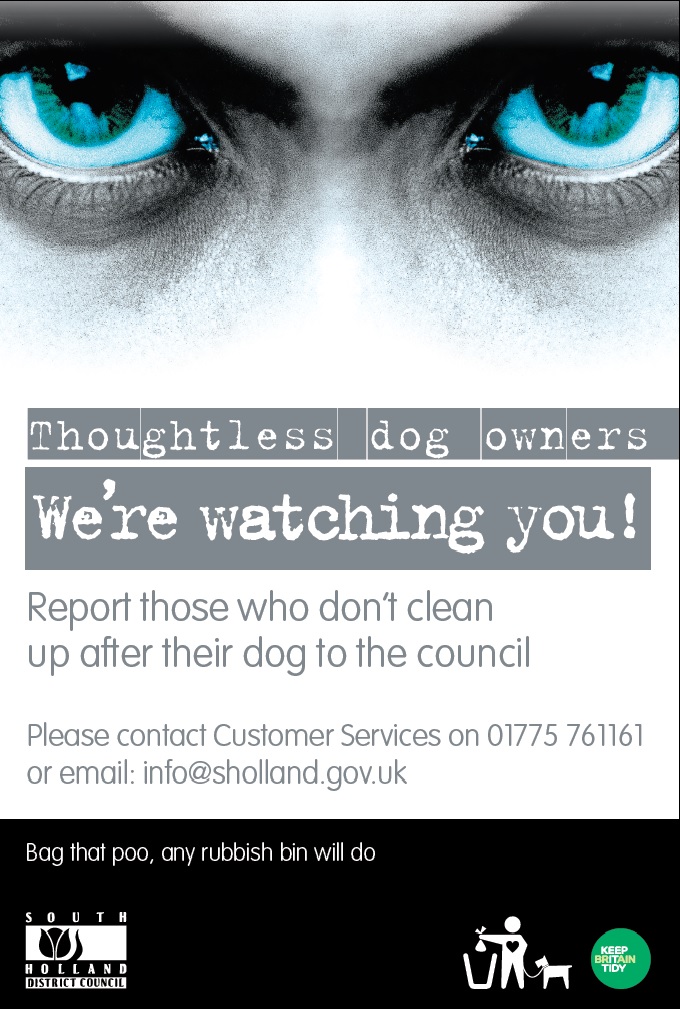 ‘We’re watching you’ campaign to clean up dog poo

A new campaign has been launched to rid South Holland streets of dog fouling.

South Holland District Council has joined up with national environmental charity Keep Britain Tidy to launch the new “We’re watching you” campaign aimed at dog walkers who don’t pick up after their dogs.
Officers will soon roll out a small number of signs at carefully selected sites across the district.
The poster’s slogan “bag that poo, any bin will do” will remind dog owners to make use of the nearby general waste and dog poo bins.
The signs are made from a material which remains visible after dark, so the message can be seen no matter what time of the day dog walkers are out with their pets.
The innovative campaign has been informed by research which has shown that dog walkers are more likely to pick up after their dogs when they think that they are being watched.
The Keep Britain Tidy pilot, which used the posters and was funded by the Department for Environment, Food and Rural Affairs (Defra), saw an average reduction of 46 per cent in the levels of dog fouling.
Coun Malcolm Chandler, portfolio holder for environmental health, said: “The vast majority of dog walkers are very responsible and pick up after their animals.
“This campaign aims to remind those who may be tempted to leave it that it is not acceptable.
“Dog fouling isn’t a big problem in the district, but when it does occur it is deeply unpleasant for residents, who often tell us that it is by far the worst type of litter.
“That’s why we’ve teamed up with Keep Britain Tidy to help make sure our outside spaces remain enjoyable for everybody.”
Dog owners should pick up after their dog and dispose of the poo bags in the nearest bin or by taking it home to dispose of in their own household waste bin.
Residents can inform the council of litter and dog mess on its website. Visit www.sholland.gov.uk/doitonline/