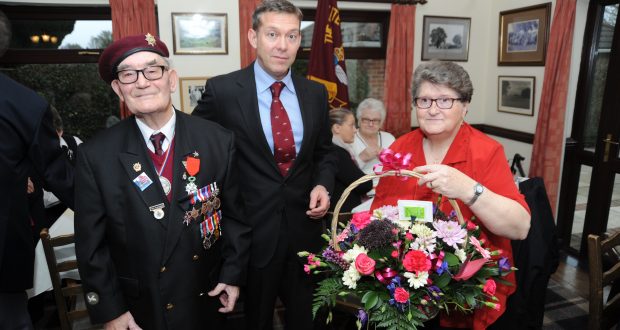 Tony Blackman after receiving his Chevalier de La Legion d’Honneur in 2017 pictured with his wife Rita, and Major Adam Jowett (Retd), of The Parachute Regiment.

A veteran of D-Day and recipient of France’s top accolade is to get a guard of honour at his funeral following his death last week.

Tony Blackman (96), of Weston, died after a short illness.

Born in Northfleet, he joined the Army aged 18 to fight in the war with the 12th Battalion (Airborne) Devonshire Regiment, part of the 6th Airborne Division.

There followed many months of training using Horsa gliders in anticipation of of the planned invasion of Europe, which would become known as D-Day.

However it became clear that before the invasion that there were not enough Gliders to carry the Battalion, so they landed on Sword Beach in Normandy on June 6 1944, from Landing craft infantry, (LCI) vessels, following aa ten hour journey across the channel.

The vessel was unable to close on to the beach due to the rough conditions, so the troops were lold tp jump into the sea to reach the shore.

Tony jumped off and went straight under, but was pulled up by another soldier and told to run as hard as he could to reach the beach and cover. Tony, spitting out water , said ‘you must be joking’ but when told there were snipers on the high ground, he did as he was told.

The main objective at that time was the relief of Caen, and he fought in t o the 22 nd of June. the area of La Bas de Ranville, repelling German counter attacks prior to the British breakout.

He also took part on the assault on the village of Branville on the 22 nd of June. C Coy took Branville and the Coy advanced towards Tolouse.

Tony was wounded on July 25 when a mortar bomb hit the trees above him, he ended up ten feet away wrapped around a tree.

He was collected by the medics and treated for wounds to his thigh and legs. After further treatment he was flown back to the UK for major treatments to his wounds in a military hospital in Staffordshire.

He had gas gangrene in his wounds and several months in hospital recovering.

He was sad when told that he would not be able to rejoin his colleagues on his release, a decision he much regretted.

For his service in the Liberation of France during World War II he was awarded The Chevalier de La Legion d’Honneur by the French Consul in January 2017.

Following the war he worked in a pharmaceutical company in Dartford and for a water company.
He met wife of 46 years Rita when the pair were both volunteers for the St John’s Ambulance Service.

They moved to Lincolnshire in 1999 after the Bluewater Shopping Centre was built next to their Kent home and became involved in the running of Weston Village Hall.

Rita said: “He was a very shy person really.

“He loved woodwork and making children’s toys and doing the garden, something he continued to do up until only a few months ago.

“I’m going to miss him terribly.”

The Spalding branch of The Parachute Regimental Association said in a statement: “We were proud to have him as a member and a friend.”