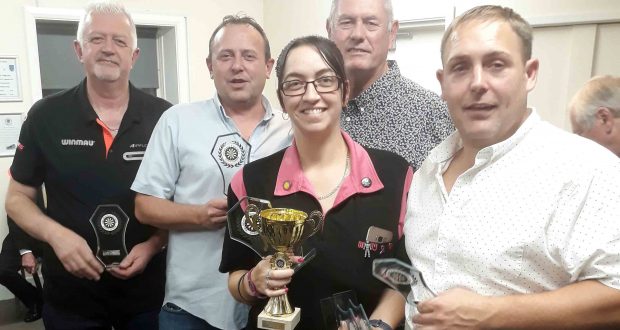 The finals night of the Holbeach and District Summer Darts League proved to be an impressive one for Tigers Social Club.

In a display of dominance, Tigers B romped to a 27-8 success over Holbeach USC B in the top team competition on offer on the night.

It was a little closer in the second tier version, with Tigers B – who finished third in their league – defeating second-placed Five Bells A 21-14 to lift the cup.

In the singles competition, Tigers B star Gary Mace secured the Division One honours after beating Ashley Allen (Rose & Crown B) 3-2 in a cracking contest.

Beaten in the semi-finals were Kevin Newton (RBL) and Dan Nelson (Five Bells A).

There was a close contest in the Ladies’ Cup final as Tracy McCreery and Pearl Pilcher slugged it out. It went the distance, with Greyhound’s Pilcher beating Holbeach USC B’s McCreery 3-2.

It was the same score in the Captain’s Cup final as Hat and Feathers skipper James Truman got the better of Danny Goddard (Holbeach USC B) 3-2.

Also decided on the night was the Division Two Pairs trophy.

That also went the way of Tigers A, with Richard Brookes and Phil Horspool knocking off Nick Horspool and Newton (3-1).

The final of the Division One Pairs between Tigers B team-mates Claire Brookin and Mace and Richard Pearson and Dave Piccaver is still to be played.