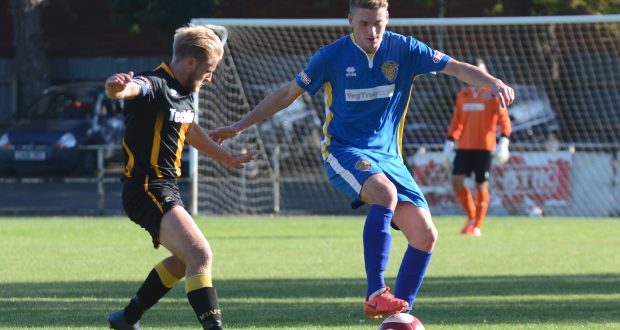 Kane Lee’s 38th-minute effort put the Moatmen back ahead – and they held that lead all the way up until the 90th minute, when Acar’s second penalty in as many weeks secured Matt Easton’s side a share of the spoils and moved them out of the bottom two.

On a bitterly cold and stormy afternoon that saw hard sleet driving down the pitch for a long spell, conditions were far from ideal for the players.

But they provided the brave souls that battled for a sheltered position pitchside, with some entertaining football.

Visiting Gresley, enjoying one of their best starts to a season for a number of years, and commanding seventh position at the start of the game, were heading the game after just 15 minutes when the lively Steadman broke free of his markers inside the area and blasted the ball past Tulips’ deputy keeper Alex Smith.

But their celebrations were short lived with Davison restoring parity just three minutes later with a well taken far-post header to add the icing to a smart inter passing sequence down the right side.

Gresley came storming back to inflict pressure on Smith’s goal, but they had their keeper Oliver Fairbrother to thank when making a stunning fingertip save to turn

Davison’s piledriver over the top angle of his goal posts.

It was all action as play continually switched from end to end. Martin Smyth’s free-kick rattled the home woodwork before Lee worked space just outside the area and turned smartly to restore the visitors’ advantage in the 38th minute.

At the other end with Acar assisting, Spalding’s teenage striker Luke White saw his goalbound effort deflected for corner.

Tulips’ man-of-the-match Kegan Everington looked to have levelled the scores shortly after the interval, but his effort was disallowed for a marginal offside decision.

Minutes later the hard-working midfielder saw his well-judged shot from the edge of the area slide inches wide of the target.

Substitute Scott Floyd tested Fairbrother as the Tulips turned on some late pressure, which also saw fellow sub Leon Mettam on the end of a slick right side movement but denied by the outside of a post.

Acar was posing problems for the Gresley rearguard but time was running out for the Tulips. However, with the clock edging towards a period of added time, Acar was upended as he made his way into the area and he stepped up to give Fairbrother no chance to save the resulting penalty.

In the few moments of the game remaining, Gresley’s Albert Lansdowne was presented with a red card by referee Duncan Robertson for elbowing a home player in the area.