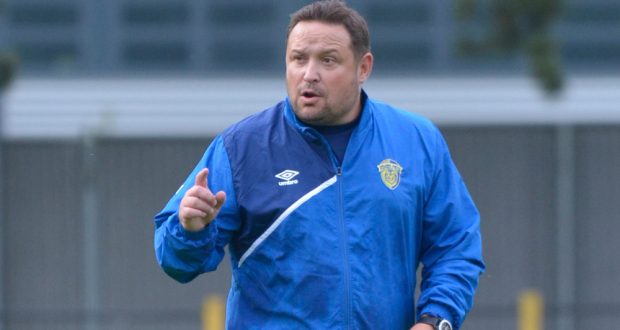 ON THE UP: Chris Rawlinson. Photo by JAKE WHITELEY

Frustrated boss Chris Rawlinson is hoping that Evo-Stik NPL First Division South officials will help his side out after seeing Tuesday night’s trip to Leek Town postponed at the 11th hour.

The game was postponed due to a waterlogged pitch around an hour before kick-off – but the Tulips had already arrived at Harrison Park.

With 100 miles between the Staffordshire venue and Spalding’s Sir Halley Stewart Playing Field, the South Holland-based players like Adam Jackson and Jonny Lockie made a 200-mile wasted journey.

Rawlinson, who instead diverted to Stocksbridge Park Steels to check out Saturday’s opponents Witton Albion, feels the situation was avoidable and wants to game rearranged for a Saturday.

The Leek pitch passed a pitch inspection at 2.30pm, but the forecast heavy rain put paid to the fixture – rendering the earlier inspection as pointless.

“I think we’re all a little frustrated,” said the Tulips chief. “Of course, there’s nothing anybody can do about the weather.

“But this rain was always forecast. They had an inspection at 2.30pm – so if there was even a question over the pitch then, it should have been called off sooner.

“A few of the lads are angry and I can understand that. Hopefully we can speak to the league and get the game switched to a Saturday now. We’ve got a few Saturday fixtures that owe more to midweek games and it would stop this kind of wasted journey happening to us again.

“It’s not Leek’s fault and I don’t want to have a go at them, these things happen.

“But I do think the situation could have been avoided.”