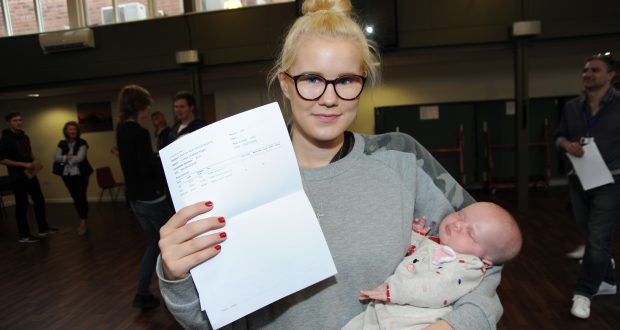 There was some fantastic A-Level results at Spalding Grammar School including one student who delivered more than just grades over the summer.

Amelia Knight was delighted to get a BCC after taking the exams while eight months pregnant.

She went to pick her exam results up with the now month-old Isla-Mae Knight on Thursday.

“My last exam was two weeks before Isla-Mae’s due date,” she said. “It was tough, pretty much all through the year as I had pretty bad morning sickness which made coming into school difficult.

“Luckily it eased off for the exams themselves.

“I’m delighted though. At first I’m going to have a year out and spend as much time with my baby but I want to eventually study at Kingston University (in London). I want to be a primary school teacher.”

More than one in two students picked up a grade B or better.

Students are now looking to go into a host of varied careers including  Nihad Aziz whose been inspired to take up dentistry by his brother and is heading to Bristol after picked up As in biology and chemistry as well as a B in maths.

Budding volcanologist Ellen Martin got A grades in maths, physics and geology to study geophysics in Leeds. She told The Voice: “The ultimate goal is to study volcanoes. They’ve always been a fascination.”

Similarly Joe Roberts will be on the path to realising a longstanding dream after being accepted at Southampton University to study marine biology.

“It’s something I wanted to since I was about six so I’m really delighted and happy as well as quite relieved,” he said. “Coral reefs are something I would like to get into studying.”

It’s not all about university though. Victoria Beliavska is to take on a degree apprenticeship with Bakkavor. She said: “It’s a great opportunity to do something and learn on the job.”

Her friend Katrina Naliviako is another not going to university but instead looking to go into the RAF as a weapons technician. “I’m really excited about it,” she said.

Matthew Day meanwhile is doing an apprenticeship in law with Maples of Spalding. “I find it really interesting and I’m looking forward to getting started.

For this week’s cover star of The Voice, Gaby Taylor and her boyfriend Daniel O’Connor, getting to the school involved a 5am drive from the family holiday in Norfolk. It was rewarded with finding out she had earned an A in psychology, B in history and C in physical education despite being hampered with a condition that’s left her in constant pain.

“The results are really good considering I was not in school for two months and I was expecting worse,” said Gaby who is heading to De Montfort University to study psychology.

Spalding Grammar School headmaster, Mr Steven Wilkinson, said: “The school has achieved 53 per cent A*-B which represents a slight, but not unexpected dip on last year. Although absolute attainment is one measure, we are more interested in the progress made by individual students during their time in the sixth form.

“We set students ambitious targets in line with those expected of students attending the top 20 per cent of schools nationally.

“We have seen a four per cent increase (to 61 per cent) in the number of exam entries where students are reaching at least those targets.

“I am particularly impressed by the fact that in biology, business, engineering and PE, those aspirational targets were met by in excess of 90 per cent of candidates.

“We have been working at a time of curriculum change, with staff very much in the dark on what to expect from the new linear A Level examination.

“With very little guidance coming from examination boards, I think our results are testament to the resilience and endeavour of both staff and students.