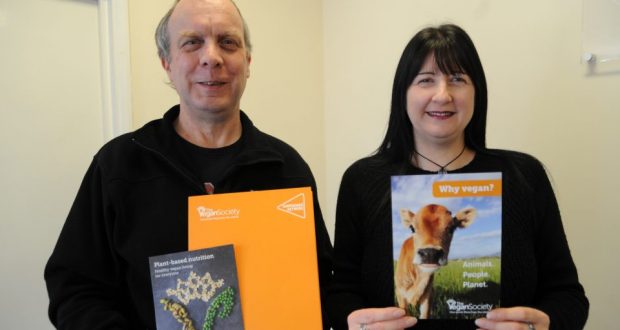 Ian Tarplee and Karina Saunders with some of their leaflets.

A Spalding couple have launched a crusade to promote vegan food in the town.

Ian Tarplee and Karina Saunders have been into local restaurants and cafes asking for them to have vegan options on their menus.

Several restaurants have already come on board and added vegan options including Penningtons, The Loft and The Riverside Cafe in Hills Department Store.

But the pair want all eateries to follow suit.

“If you’re a vegan going looking to eat out in a local restaurant can be a real problem,” said Ian. “So what we’re doing is looking to raise awareness.

“We’ve been into local eateries and explained what we’re looking for. A number have been really helpful and moved to create menus.”

The pair, who are members of the Vegan Society, have given stickers stating on them “vegans catered for here” for compliant eateries to display in their windows.

The couple also man market stalls in the area to distribute their literature.

A new Facebook group called Eating Out Vegan in South Holland has also been launched to keep group members informed of what local eateries are offering.

“Being vegan is becoming more popular,” Ian continues. “A lot of people now know about gluten free ingredients and providing options for that and a lot of vegans identify as gluten intolerant.

“We’re continuing to raise awareness of why more should look to eat vegan.” Restaurants can contact Ian on ian@itscrueltyfree.co.uk