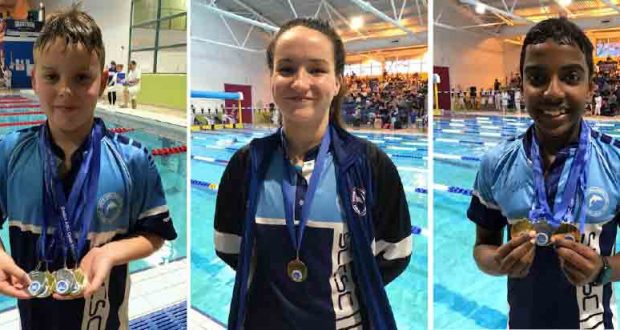 The Spalding-based club returned from the Grantham-hosted event with an amazing medal haul that included 18 golds, 36 silvers and 14 bronzes.

Aurinija Maliauskaite collected six medals from her six swims over the course of the weekend. She topped the podium claiming gold medals in the girls’ 15 years and over age group in both the 200m Individual Medley (IM) and the 100m freestyle.

In her remaining events, Maliauskaite collected four silver medals, including in one of the swims of the weekend, the 200m freestyle.

Despite being beaten for the gold medal, she posted a new PB by almost three seconds in a time of 2.08.60mins.

The Sadler brothers had a great weekend of racing, with middle brother Alex racking up eight medals from his eight swims over the two days of competition.

He collected four gold medals in the boys’ 12 years age group and showed his total domination of the butterfly events by winning the 50m, 100m and 200m distances, the latter in an exceptional swim that saw a new PB of 2.34.42mins clocked.

His fourth gold came in the 400m freestyle, posting a sizeable new PB of 4.47.52mins in the process.

For good measure, he also collected three silver and one bronze medal.

In the boys’ nine years group, Aaron Sadler swam only his second ever 100m butterfly – and reduced his PB time by a huge nine seconds to stop the clock in a terrific time of 1.45.37mins and claim the gold medal.

He also collected a bronze medal in the 50m freestyle.

Owen Sadler made it a family hat-trick of medallists by claiming the bronze medal in the boys’ 15 years and over age group in the 200m backstroke. He touched the wall in a new PB of 2.38.34mins.

Frank Lamb, meanwhile, competed in all 15 events on the programme in the ten years group – amazingly claiming a medal in each event.

Anbazhagan also added five silver medals to his haul over the two days of swimming.

Elsewhere, Daisy Rummery made it a double gold celebration by winning both the 400m freestyle and the 200m backstroke in the girls’ 15 years and over age group.

In both events she showed excellent back end speed, coming back strongly in the second half of her races to claim her wins.

Sophie Wilson was another one on-song, sweeping to five medals over the weekend. She collected a bronze medal in the girls’ 11 years age group in the 50m freestyle.

Her third silver came in 50m backstroke, again with a PB.

However, she saved her best until last and clinched gold in the 100m backstroke in a further PB of 1.23.65mins to top the podium.

Her second medal came in the 50m freestyle, with the third silver coming in the 100m butterfly with another sizeable PB of 1.54.02mins.

Oliver Lloyd also had a busy schedule, participating in 11 events in the boys’ nine years age group. He went on to claim five silver medals, these came in the 50m and 100m butterfly, the 100m IM, 200m IM and 200m breaststroke, setting two PBs.

Aidan Evans had an exceptional weekend of racing, posting new PB times in almost all of his races in the boys’ ten years group. and making the podium on four occasions.

He collected silver medals in the 50m freestyle, 50m backstroke and in the 100m backstroke with a PB time of 1.25.55mins.

Meanwhile, Lucie Lund was a double bronze medallist. She claimed her medals in the girls’ 12 years 50m butterfly and 100m backstroke.

Rising star Erin Siggee was also a double bronze medallist in the girls’ 11 years age group. Her medals came in her preferred breaststroke distances of 100m and 200m.

Luke Sorrell continued the trend with two bronzes, including in the 200m breaststroke with a new PB of 3.36.46mins. He followed that up with another PB time in the 200m freestyle.

Isaac Bowman collected a bronze medal at the meet.

He was on fine form, setting PB times in many of his swims by significant margins in the boys’ nine years age group.

However, it was the 100m IM – where Bowman just missed out on bettering his PB – that gave him his medal.

In a determined race, he worked hard across all four strokes and touched home in a time of 2.01.07mins to claim his well-deserved medal.