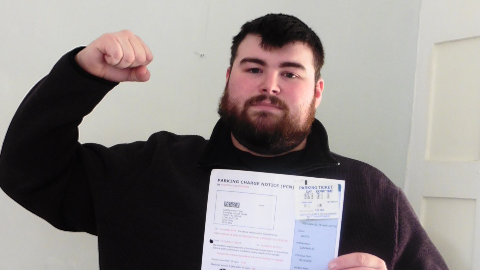 A Long Sutton man has won his case against a parking enforcement firm that wrongly charged him.

Andrew Petters was shocked to receive a parking charge notice from Civil Enforcement Ltd (CEL) stating that he had not paid to park at Hunstanton’s Beech Terrace Car Park in October 2018.

Andrew paid to park for three hours, but had left after about 90 minutes and luckily had kept the ticket.

CEL issued a “Parking Charge Notice”, which looks similar to a “Penalty Charge Notice” issued by local councils for parking fines.
Andrew secured the help of his dad, musician John Petters who ran the case for him.

They complained first of all to the DVLA, who had divulged Andrew’s personal details to CEL. This is now subject to an investigation by the Information Commissioner (ICO).

The ICO refused to deal with the complaint against CEL until it had ruled on the DVLA. CEL subsequently published the personal details to ZZPS Ltd, a debt collection company.

Andrew claims he was subjected to threats, harassment and bullying and a visit from a bailiff.

Andrew and John made a Data Subject Access request to CEL and the DVLA, who were both obliged to send all data they held on Andrew. CEL even asked for details of a vehicle with the wrong registration number.

John wrote to CEL and charged £25 for each item of correspondence as well as costs for postage etc.
CEL issued proceedings in the Small Claims Court for £269. Andrew issued a counter claim for £624.

They asked for photographic evidence of Andrew’s car leaving the car park, calibration details of the cameras used to take photos, the contract between CEL and the owner of the car park which gave CEL the authority to charge. They refused to provide these and discontinued their claim in December.

The counter claim, however remained live and on February 24 Andrew was awarded £500 plus costs and CEL was ordered to pay within 21 days. CEL failed to attend court.

John said he has been contacted on social media by other people who have had problems with CEL and has made a further complaint to the ICO, now that judgement has been given. He has also asked Sir John Hayes MP to urge the Information Commissioner to come to a quick decision regarding the DVLA.

John said: “Many people are frightened by the bullying techniques used by parking companies and do not know how to navigate the court system. It is time the government stepped in and properly regulated these organisations as well as the DVLA, which sells personal data to private companies for money. It is a disgrace!”