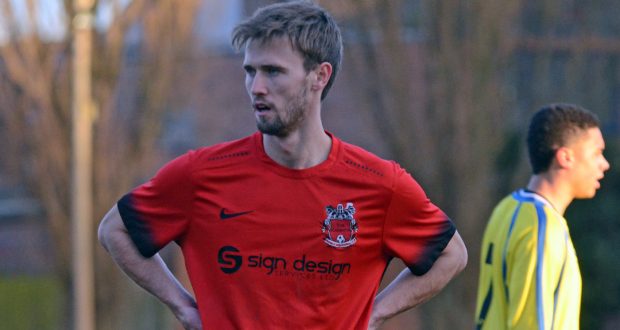 Oli Shackleton netted his first Pinchbeck United goal on Saturday as Pinchbeck United moved seven points clear at the top of ChromaSport UCL Division One with a 3-0 victory at Bugbrooke St Michaels.

On a day when a host of matches were postponed, the Knights were the only one of South Holland’s big three teams to be in action after the games involving Spalding United and Holbeach United were frozen off.

The Knights battled out a goalless first period at The Sett, before top scorer Ollie Maltby finally broke the deadlock on 48 minutes.

Striker Maltby then doubled the lead on 55 minutes, before youngster Shackleton rounded off the victory late on.

It was the same story for Holbeach United, with their away date at Kirby Muxloe called off on Saturday morning.

The Tigers remain second in the standings, but they are now 11 points behind leaders Newport Pagnell with three games in hand.

In the ChromaSport PDFL, Moulton Harrox remain top after a 3-1 home victory over ICA Sports.

They are five points clear of defending champions Peterborough Sports Reserves with a game in hand.

In Division One, Moulton Harrox Reserves are four points clear at the top after a 4-1 success at Ramsey Town.

Long Sutton Athletic remain second after a 2-0 win of their own at Oundle Town.

More football in Thursday’s Spalding Voice and at www.spaldingvoice.co.uk throughout the week.