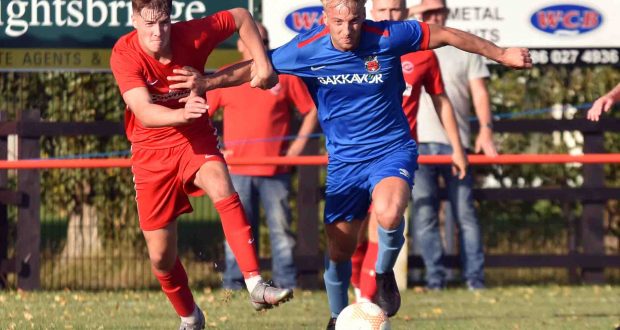 Jordan Elston struck twice to give Holbeach United an impressive 2-1 win over Loughborough University on Saturday, while Spalding United were knocked out of the FA Trophy by Bedford Town and Pinchbeck United suffered another league loss.

Starting with Holbeach, they looked to up against it in their Uhlsport UCL Premier Division clash when Kieran Smith fired slick visitors Loughborough into an 18th-minute lead.

Josh Ford was then shown a straight red card just before the break, leaving the Tigers with a mountain to climb in the second half.

But climb it they did, with youngster Elston getting the ball rolling with a leveller on 55 minutes.

Not done there, he grabbed what proved to be the winner 18 minutes from time to secure the best result of Phil Barnes’ reign so far.

The Tigers are back in action at Wellingborough Town on Tuesday night (7.45pm).

Also in the UCL Premier Division, Pinchbeck United’s poor form continued with a 3-1 defeat at Northampton ON Chenecks.

Pat Kacirek’s goal did have the Knights level at one point early in the second half, but they shipped two more goals and have now lost five of their seven league games so far this season.

Meanwhile, Spalding have now lost five games in a row in all competitions after being handed a 1-0 reverse by Beford Town in the FA Trophy.

A goal from Jermaine Rene Howe seven minutes before the break was enough to settle the Sir Halley Stewart Playing Field contest.

In the ChromaSport PDFL, Moulton Harrox made it four wins from four Premier Division games by seeing off Eye United 2-1 at Broad Lane.