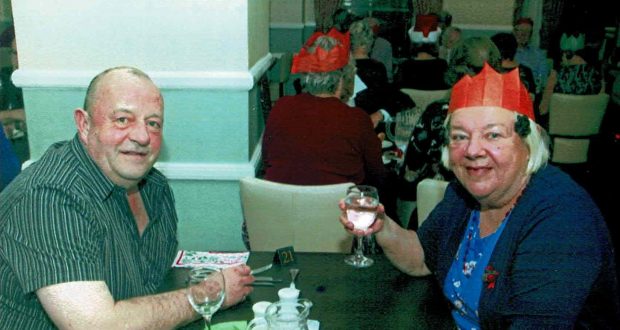 George and Rita in Christmas 2017.

A woman is urging others to give to the homeless this Christmas after her partner tragically died spending a night outside.

George Henry Parry (64) was found semi-conscious lying amid puddles between Pecks Drove West and the A16 in Spalding on the morning of December 17 last year.

Partner Rita Henderson has vowed to help the homeless this December after hearing of how exposure to the cold contributed to George’s death at last week’s inquest into his death at Boston Coroner’s Court.

He was discovered by a member of the public at 7.26am suffering from frost bite and hypothermia after seemingly having left his home the previous evening without his shoes.

The hearing heard that in the days before the incident he’d began experiencing hallucinations including seeing dragons and on December 15 had called police to tell them someone had stolen his bedroom wall.

Pathologist Dr Stuart Hamilton told the inquest that potential reasons for the hallucinations included George suffering from a urine infection and potentially from not having had alcohol.

The inquest heard that he’d began ‘episodic drinking related to bereavement issues’ after the murder of his granddaughter who was not from Lincolnshire. There was no evidence of alcohol being in his system.

He’d also been receiving treatment for being short of breath and had been tucked up in bed by Rita at 4pm the evening before being found outside.

Rita said: “George was a very proud and independent man.

“He was brilliant and kind.

“Everyone knew him as a gentleman.”

On the previously mentioned family tragedy, Rita said: “He was slowly getting over it and getting back to the man he should be.”

The couple first met in 2000 and lived together until concerns over George’s ill health led to him being offered his own managed sheltered house bungalow in Cedar Court.

After hearing at the inquest about the effect the cold had on George, Rita is marking the anniversary of his passing by providing help to homeless charities in Spalding including The Lighthouse Project.

“I’ve been taking George’s clothes to the homeless charities in Spalding so they don’t suffer on these cold winter nights like he did.

“I think that’s what George would have wanted.

“We should all help, them especially at this time of year with the cold nights whether it’s donating clothes to keep them warm or by donating items to food banks.

“It also makes you think that you have to be grateful for what you’ve got.”

Last week’s inquest heard that George had a number of injuries including a broken rib that pathologist Dr Hamilton said was ‘consistent’ with having suffered several falls but did not contribute to his death.

His body was also found only partially clothed.

The pathologist said that the brain often wrongly convinces people suffering from hypothermia that they’re too warm and so they take clothes off.

Dr Hamilton said: “I think he must have been outside for a relatively long period due to the frost bite on the toe. That’s unusual even in the winter in the UK.

“I think it’s very likely he was unconscious for the vast majority of the ordeal.”

Delivering a narrative verdict and a medical cause of death as hypothermia, coroner Tim Brennand called the case “particularly sad and traumatic”.

“It’s clear to me that events conspired together to create this tragedy,” he said. “I’m satisfied there were no suspicious circumstances or third party involvement.

“He left his residence at some point on the evening of December 16 and became susceptible to the prevailing inclement weather.”

Mr Brennard said “we may never know why George left the house” and concluded by praising Rita’s “devotion and level of care” for George.

She was joined at the hearing by George’s friend Carole Duckworth who said: “George was a lovely man who had a really good heart. He would help anybody.”