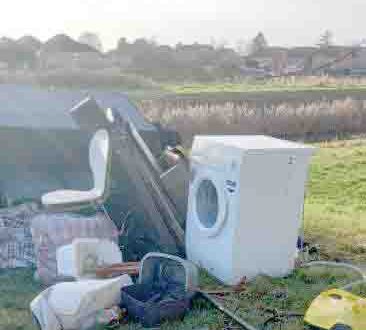 No prosecutions for fly-tippers here

More than a year after the Spalding Wombles starting clearing rubbish around the town and several thousand black bags later, there have been no prosecutions for fly tipping by the district council.

While neighbouring Boston Borough Council has secured 25 prosecutions in six months, South Holland has zero in the last year.

Despite ‘hundreds’ of reports of fly tipping around Spalding by members of the Wombles of Spalding Common, a Freedom of Information request revealed the numbers.

Since the start of this year, the Wombles have already reported five incidents of illegal rubbish dumping, including a washing machine near a nature reserve and half a sofa on Old Fen Lane.

It is a year since the Wombles was created by friends who went out for a New Year’s walk in 2021 and were disgusted by the amount of rubbish laying about.

After just three weeks there were more than 1,000 members out and about collecting rubbish and tidying-up the town.

“We were a bit worried that after the lockdown people would drop off, but that hasn’t happened. We have a hardcore group of around 400 of which 50 are out every week and ten every day – the response is still amazing,” said Sam Roberts, one of the founder members.

All the cans and bottles found have been collected and sent to recycling while members of the group have reported fly-tipping on an almost weekly basis, said Mr Roberts.

“We have even found fly tipping where there has been letters included with names and addresses so it’s very disappointing that nobody has been prosecuted at all,” he said.

A Freedom of Information request was made by Womble Brendan D’Abreo and in its response on January 7 the district council confirmed it had ‘initiated no prosecutions for fly tipping in the last 12 months.”

Boston had taken 25 to court in six months, with penalties ranging from £200-£400 for those convicted.

“In the three or four encounters I have had with the council, their first response has been to make excuses and have another meeting rather than fix the problem,” said Mr D’Abreo.