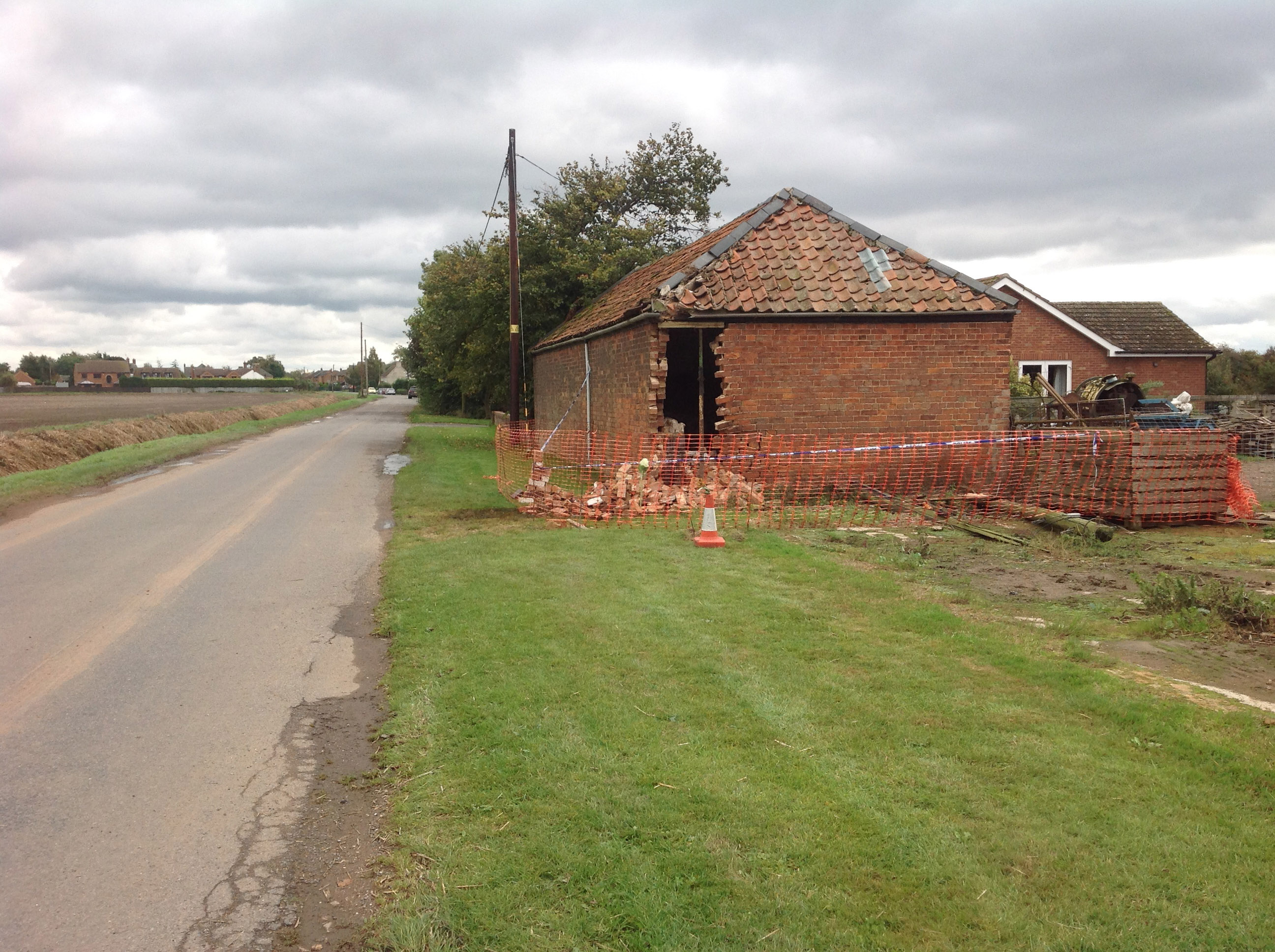 The site of the accident where Steven Gibling died.

Mystery surrounds death of man who crashed into barn

Mystery surrounds the death of a man whose car left the road, hit a telegraph pole and smashed into a barn wall.

On Thursday coroner Prof Robert Forrest resumed the inquest into Mr Gibling’s death. He returned a narrative verdict as he couldn’t be sure whether Mr Gibling crashed the car intentionally or whether he may have fallen asleep or blacked out at the wheel.

Mr Gibling’s widow Kara (34), who lived with him in Brownlow Crescent, Pinchbeck, said she had known him for about four years and they had married in August 2013.

Giving evidence, she told the court of the hours leading up to the accident.

She said Mr Gibling had been very upset after some serious allegations had been made against him and the police had become involved.

She said on the day of her husband’s death, Pc Charles Ferguson had visited the house to speak to them about the allegations.

She said she left the house with Pc Ferguson, leaving Mr Gibling at home with the children.

They returned just after 8pm and saw her husband driving off in his silver Ford Focus. It was the last time Mrs Gibling saw him alive.

She told the coroner that her husband had insomnia and had only slept for about nine hours in the five weeks prior to the accident.

When asked about Mr Gibling’s frame of mind before the crash, Mrs Gibling said he was “exhausted” and “devastated over the allegations”.

A post mortem carried out by consultant pathologist Kevin West confirmed that Mr Gibling died of multiple injuries which included leg and rib fractures. Evidence concluded that he wasn’t wearing a seatbelt at the time of the accident.

The inquest heard from several witnesses who saw the car after the accident.

Giving evidence Pc Ferguson said he had been called to the Giblings’ home to investigate allegations made against Mr Gibling.

He said after Mr Gibling drove off he searched the area but was unable to find him.

He went back to the police station and at 11.23pm received a call from the control room regarding a crashed vehicle that matched Mr Gibling’s car.

He said: “We were the first police on the scene. I went to the driver’s side and saw Mr Gibling’s body. It was obvious he was dead.

“The front of the car was U shaped. There was no engine, it had been pushed back into the body of the car.”

Pc Ray Holloway, forensic collision investigator with Lincolnshire Police, estimated that Mr Gibling had been doing 50-60mph at the time of the accident and that he hadn’t touched the brakes.

The inquest heard that Mr Gibling had visited his GP for insomnia and episodes of blackouts in the past and Mrs Gibling had told police that he had fallen asleep at the wheel twice when she had been a passenger. Neither of the conditions had been reported to the DVLA.

Summing up, Prof Forrest said he was unable to be sure whether Mr Gibling had driven off the road intentionally or not.

He said GPs should be reporting people with a history of insomnia or blackouts to the DVLA so a decision can be made on whether it’s safe for them to continue driving.