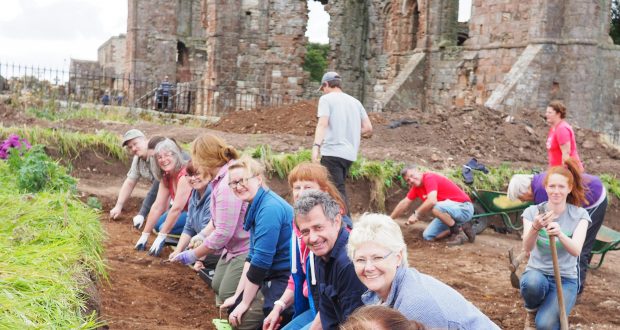 The mother of an archaeologist visiting her son’s dig site at Lindisfarne has unearthed a 1,200-year-old game piece that has hit headlines all over the world.

Heather Casswell from Gosberton and husband Nick were visiting the dig site run by their son Chris, a former Spalding Grammar School pupil, when she made the discovery.

The ornate glass boardgame piece is only the second such piece ever found in the British Isles and was found during excavation of the iconic monastery which was one of the first to feel the force of the Viking invasion.

Dating back to AD 700-900, archaeologists believe it came from a set that would have been used for playing a uniquely Northern British version of ‘tafl’, a family of games which were derived from the Roman war game Ludus Latrunculorum, widely played before the arrival of chess in the 11th-12th centuries.

“It is extraordinary to find a glass tafl gaming piece like this in such perfect condition. They’re as rare as hen’s teeth,” said Mark Hall, a leading specialist in Roman and early medieval games, and Collections Officer at Perth Museum & Art Gallery, who inspected the piece when it was found.

Heather discovered the piece on her birthday and it has since featured nationally in the likes of The Guardian, The Telegraph and The Daily Mail, and across the world to as diverse places as The Dice Tower, the world’s leading boardgame channel, based in the USA, and making headlines in The Singaporean Straits Times.

Heather said: “It is amazing to see how far the story has travelled and the interest shown by so many.”

Now in its fourth season, the dig has revealed part of a cemetery and a workshop associated with the monastery, both dating to AD 700 – 1000 when activity on the island was at its peak.

Volunteer diggers will be welcome again during the next season of excavation which will begin in September this year.