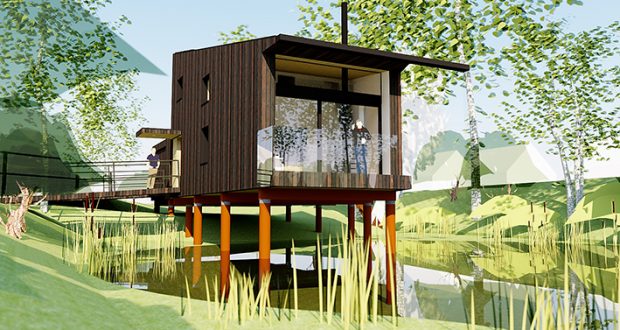 An artist’s impression of how the new house will look.

The future of a Spalding green space is set to be secure – by building a “talking point” home on it.

A patch of land was left as an “amenity” off Magellan Way, but it has been left overgrown and unloved.

Now an architect is looking to building a futuristic-home on stilts on the site while protecting the wildlife and increasing the site’s biodiversity.

John Retchless, who lives in Wisbech, makes regular trips to Spalding where his son attends school.

He spotted the land, bought it and is planning to make his family home part of the environment.

“We were looking for somewhere nearer the school,” said Mr Retchless, a director of Parsons and Whittley, of Swaffham.

He said his company had developed a specialism for environmentally-friendly homes and buildings.

The property he will be building on the land bounded by Magellan Way and Hudson Road, will have a section on stilts so it sits over the existing pond.

He said the “modest” dwelling would sit “lightly and quietly” within the plot of land which he wants to protect.

The three-bedroomed home will use natural and recyclable materials and would be built to Passivhaus energy levels – using the absolute minimum necessary.

Members of the district planning committee were told last Wednesday that the site had been attracting fly-tipping and had lost some of its usefulness to wildlife as it had not been managed.

Coun Bryan Allcock said the new home would be a “real talking point.”

“It was a pit with an estate built round it. It does not help the environment and I think if someone wanted to put a ‘normal’ house on it, it would look wrong,” he said.

Objections had been received regarding the application, some complaining about tree loss.

But Mr Retchless said there would be no losses, with pollarding carried out on those trees which were not covered by a protection order.

With someone living on the site, managing the area and encouraging diversity, Mr Retchless said its future looked brighter.

Coun Harry Drury said the site had become a mess and nobody had been looking after it.

“I am really pleased to see they have put some thought into it,” he said.