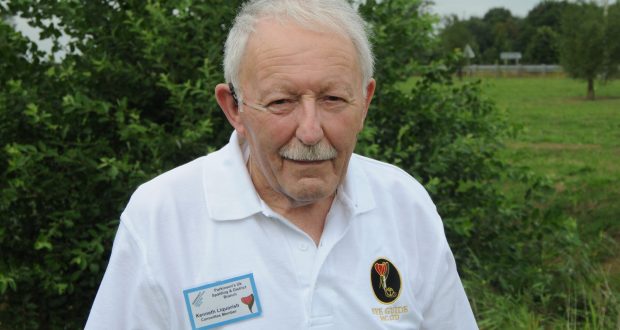 Ken Liquorish with the Eye Guide MC which the Spalding and District branch of Parkinson’s UK have been trialling.

A local group for people with Parkinson’s is at the forefront of a potentially life changing treatment for the disease.

After 18 months without seeing each other, the Spalding and District branch of Parkinson’s UK is due to begin meetings again on Thursday, September 16.

But even while they’ve been away, many members have continued trialling an aid invented by one of their members, that they say helps them to have more control over their bodies.

Sandra McDonough, of Long Sutton, came up with the Eye Guide MC, a device you wear on one ear that sits in your peripheral vision.

A Spalding-based company set up to market the device claims on its website that the aid “can instantly improve the debilitating symptoms of Parkinson’s Disease (speech, tremor, movement, coordination).”

Ken Liquorish who turns 81 tomorrow (Friday) says the device, and the group as a whole, has helped him immensely after he was diagnosed with the condition in 2014 after noticing he was struggling while helping out a professional artist.

“It didn’t affect me as much then,” said Ken, of Deeping St Nicholas, who had previously spent his whole life working on the land. “It’s deteriorated since then and I got to the stage where I was struggling to walk even a few paces.

“The support I had from the group helped a lot during that time.

“But since I’ve had the Eye Guide MC it’s improved again and now I can walk a mile a day. It makes such a difference and helps me stop shaking.

“We at the Spalding and District branch have been kind of guinea pigs for it.

“Sandra, who has Parkinson’s herself and invented it, asked other members of the group if we’d help trial it.

“I’m the kind of person who’ll try anything to see if it helps.

“A lot of people were keen and the University of Lincoln is involved.

“Not only are they hoping it will go around the country for those with Parkinson’s but they’re also testing it to see if it can have an effect on other conditions such as dementia, autism and MS.”

Sandra invented the prototype for the Eye Guide by tying a knitting marker to glasses as part of experiments after she’d been told wearing an eye patch could help her walk.

She was diagnosed with Parkinson’s just before her 40th birthday and had previously experienced symptoms including being unable to speak and being wheelchair- bound.

Sandra is currently not at a stage to speak about the project publicly but says on the website www.eyeguidemc.co.uk: “I walk straight, my speech is strong, my tremors are under control and I have full awareness of my left side and my handwriting is back to normal size and I can drive with the blessing of my doctors.

“I did not cure Parkinson’s; I have control of it.”

The Spalding and District branch of Parkinson’s UK started as an independent support group for local people with the disease ten years ago.

Jane Coxon, of the organising committee, says there are about 100 people with Parkinson’s in South Holland and meetings regularly get 40 people in attendance.

Sessions are the third Thursday of every month from 10.30am to 12.30pm at Pinchbeck Village Hall in Knight Street.

Not only is there the social aspect but also activity sessions including seated exercises with Mel Roberts.
The group also works with Call Connect bus service to ensure people can get to the sessions.

“It’s a very good group with some exceptional volunteers,” Ken continued. “Not having the meetings affected me quite a bit more than I thought.

“The volunteers work so hard for the best for us and it’s really appreciated by us.

“It’s important to get the group started again to help those that need it.”