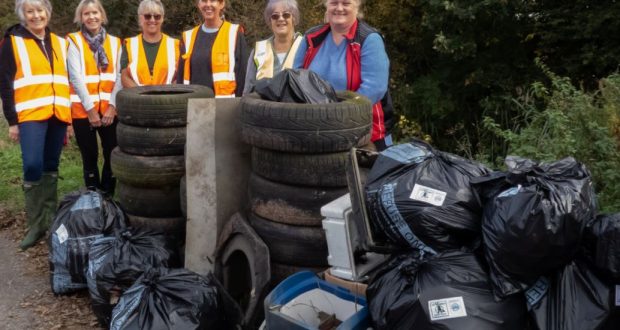 Members of the Saturday crew with just some of the illegally dumped rubbish.

Flytipping into drainage dykes around South Holland could cause major flooding problems in the winter.

A group of regular litter-pickers is warning that with the onset of winter, blocking the drains with dumped rubbish could see serious issues with drainage.

The Saturday Crew of the Wombles of Spalding Common has moved a huge amount of illegally dumped rubbish including 16 tyres, microwaves, packaging, traffic signs, beds, sofas and rolls of carpet from one mile-long stretch of roadside dykes.

“This will not just ruin our homes but also the farmland. With water everywhere from the Cambridge Fens to Skegness under three feet of water, where will you live?” said Brendan D’Abreo, a regular member of the Saturday crew.

“We have noticed that nothing is improving in people’s habits in the matter of littering and fly-tipping.

“Schools and our youngsters are showing more responsibility than adults. This is promising for a future that I will never see,” he added.

Until local and national government is much more committed to reducing the problem, it won’t change, said Mr D’Abreo.

He said that district and county councillors will be asked to offer ‘more than just words.’

“None of us expect this to be a change that will happen quickly, but the Saturday Crew will do more about this problem than just clean a ditch or layby every week,” he said.

“One person might think ‘it’s only a couple of tyres’ but then if 100 people think the same there is a huge problem. If one mile of ditch has so much solid rubbish in it, whatever do all our drainage dykes have in them?

Mr D’Abreo said a flytipped stretch of road towards Gosberton had been reported four times but nothing was done until a group of volunteers turned-up to clear it themselves.

“I have no faith in the councils – nothing changes. There is no silver bullet, you have to do 20 little things to change attitudes, but we have to do something,” he added.

He stressed that the council’s street cleaners were ‘quiet heroes’ and had been very helpful in removing the rubbish collected by the volunteers.

To join the Wombles of Spalding Common or the Saturday Crew, see the group’s Facebook page. 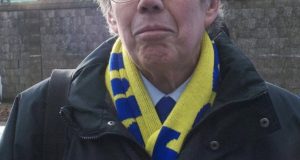