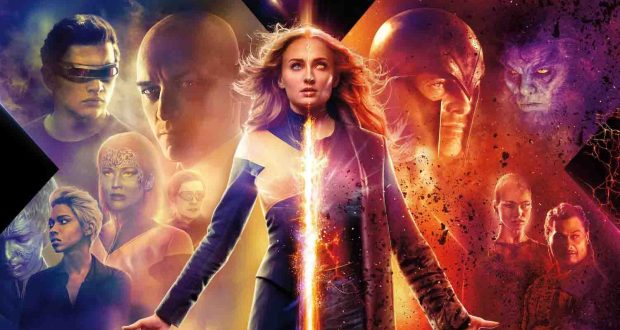 To say the X-Men timeline had become a little confusing is putting things mildly.

That being said, Fox had assembled a mighty cast of characters for their ‘First Class’ and I’ve mostly enjoyed what has been served up over the past decade (Apocalypse aside).

With Dark Phoenix acting as their last stand (pun intended) before Marvel Studios get their hands back on the usage rights of the X-Men, there was a real chance here to go out with something of a bang.

Anyway, events here are centred around Jean Grey (Sophie Turner) and her transformation from an already super-powered mutant to perhaps the most powerful of them all, an event that had already been fumbled in 2006’s X-Men: The Last Stand.

Once again, it’s done quite clumsily and fails to give Grey – always a likeable character – any sort of personality.

Her change begins during a rescue mission in space, with Jean’s Phoenix powers making her views transform and ramping up her abilities to God-like levels.

That alerts Jessica Chastain’s sinister alien villain (I genuinely can’t remember them giving her a name), while also putting Jean on a collision course with both the X-Men and Magneto’s off-the-grid team of mutants.

In what essentially turns into battle royale between the three different parties, the action is frequent and exciting and the casting, as ever, is bang on the money.

But a few feel a little redundant here and one death scene had me scouring the internet to see what was going on with X-Men canon.

Perhaps the biggest waste of talent is the film’s use of Chastain, however.

A great actress, she couldn’t really be any more of a generic villain and her ample skills are never really tested at any point.

It’s also a little odd that no attempt whatsoever has been made to age the X-Men, who are supposed to be within a decade of the characters we first met back in the 2000 original.

You could forgive that if the story was a little better, but sadly I was left disappointed as the credits rolled.

Don’t get me wrong, you’ll enjoy the breathless action – especially in 3D. However, as send-offs go, Dark Phoenix really isn’t all that memorable.

That being said, I’d love to see these characters on the big screen again.

But it’s perhaps a blessing that Marvel Studios now have the rights and will be able to integrate them into the juggernaut that is the Marvel Cinematic Universe.