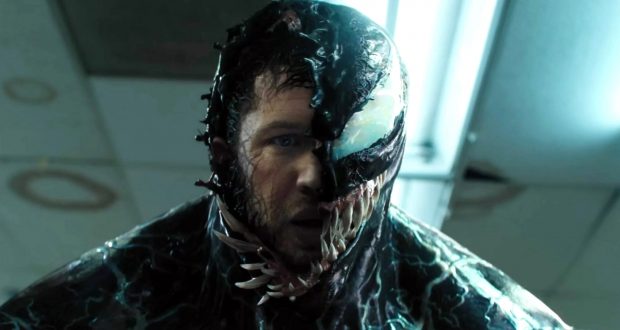 As far as the hype train is concerned, Venom seemed to come full-circle in a very short period of time.

When the trailer dropped, it came with seemingly universal approval from the notoriously hard-to-please comic fan crowd (myself included).

Sure, Sony wasn’t able to incorporate Spider-Man into Venom’s origin story, but having Tom Hardy as the title character went some way to making up for that.

However, the early reviews did their best to quell expectations – leaving me with mixed expectations ahead of my trip to Boston West End Cinema on Friday.

In reality, the truth is somewhere in the middle. Venom is a far cry from the polished Marvel Studios offerings we’ve now become accustomed to in the super-hero genre; but it’s certainly not the stinker some would have you believe.

You can split Venom into three parts. The tame and slightly rushed opening act introduces us to Hardy’s Eddie Brock, an investigative reporter who seems very content with his life alongside fiancée Anne Weying (Michelle Williams).

However, things start to go wrong when Eddie delves too deep into the backstory of the slightly generic villain Carlton Drake (Riz Ahmed), a corporate overlord intent on advancing the human race by exploring space for resources and alien life.

It’s he who is responsible for bringing Venom, a slimy alien Symbiote, to earth.

Venom (and a host of his fellow Symbiotes) must merge with a human host in order to survive living on Earth – otherwise the body rejects the bond, killing the host and potentially them, too.

Drake burns through humans like cannon fodder in a bid to find a perfect match, but it’s Brock who unwittingly becomes the first to merge with a Symbiote.

It’s here that his relationship with Venom is formed and the film begins to find its stride. Hardy, who also voices the Symbiote, excels in the second act as the pair begin to come to terms with their body-sharing situation.

There are a number of funny scenes (most notably in a restaurant) before the action really kicks in, with Drake keen to reclaim his ‘property’.

However, with other Symbiotes on the loose, Venom and Brock must get on the same page if they are to prevent Drake from achieving his dastardly goals.

But for a CGI heavy final act that doesn’t quite hit as many high notes as it should, Venom would be a very solid super-hero fare.

Hardy’s performance is strong, as you’d expect. He’s as intense as ever, but you can’t help but feel that Venom would be better for an 18 rating that would have allowed for more gore (he enjoys eating human heads, don’t you know?)

Williams also gets more screen time than you’d perhaps expect, which is great to see. A fine actress, she appears to have plenty of fun in the role.

Sadly, Ahmed’s Drake is largely forgettable as the most predictable of villains, though.

It’s hard not to compare Venom to the big Marvel offerings of the past decade.

In that regard, it comes up way short in terms of polish and gravitas. But there are plenty of laugh-out-loud moments and enjoyable action to devour at the cinema.

And, with a post-credits scene setting up a sequel, it may yet get the chance to right its many wrongs.