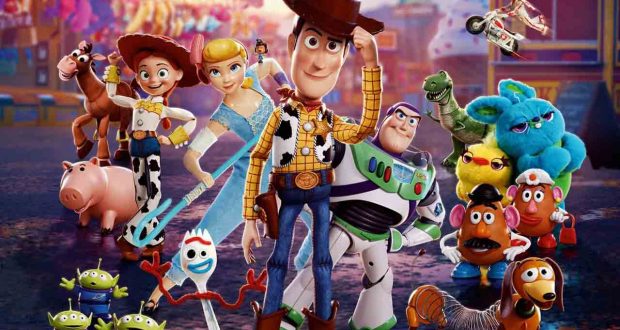 I’ll be honest from the off, I’m not a fan of the Toy Story films – which perhaps puts me in the minority when it comes to cinema-goers.

Even as a 12-year-old the original just wasn’t for me, while the sequel is one of a small selection of films that I couldn’t be bothered to carry on watching after feeling less than enamoured with its start.

I skipped number three altogether, but I was prepared to give Toy Story 4 a chance given the largely positive reviews the series has received from, well, pretty everybody else other than myself.

Given that Woody, Buzz, and the rest of the gang apparently found a happy ending in the third film, Toy Story 4 does (oddly) feel like a fresh start for the series.

All settled with new owner Bonnie, the only problem appears to be that she’s not ever so keen on Woody (voiced by Tom Hanks).

However, the famous toy cowboy finds a purpose in helping settle Bonnie into her new pre-school; which mostly equates to looking after the feckless Forky (Tony Hale), her favourite toy.

His arrival coincides with a road trip for Bonnie, her family and the toys – and leads to a reunion between Woody and his long-lost love Bo Peep (Annie Potts).

The duo team-up in a bid to track down the wandering Forky, leading to the introduction of a number of new characters (none better than Keanu Reeves’ enjoyable Duke Caboom).

At the same time, that forces Buzz (Tim Allen) to step up and lead the original gang. His arc is one of the more humorous threads and is boosted by a recurring gag that works nicely.

Naturally, Woody’s story is the main event. He reunion with Bo Peep makes him question his natural purpose – should he stay loyal to his owner, or embrace the nomadic life of being a lost toy?

It’s a tale that is sure to lapped up by fans of the previous instalments in the series and is handled well.

Produced impeccably by Disney Pixar (as you’d expect), these films continue to set the standard when it comes to animation.

But for me, an adult viewer attempting to dip back into a series that never really grabbed me in the first place, it did little to change my mind.

There’s nothing remarkable or exciting about the story and there were very few moments that made me laugh.

Sure, Forky was a giggle initially and Buzz had his moments, but I found myself losing interest at multiple points of the 100-minute running time. It must be said that much of the original cast are sidelined for large periods here, too.

But I’m not this film’s target market.

Kids will love what appears to be the final act of this much-loved series, while those who grew up enjoying the originals will probably have the opposite opinion to me and enjoy every second.