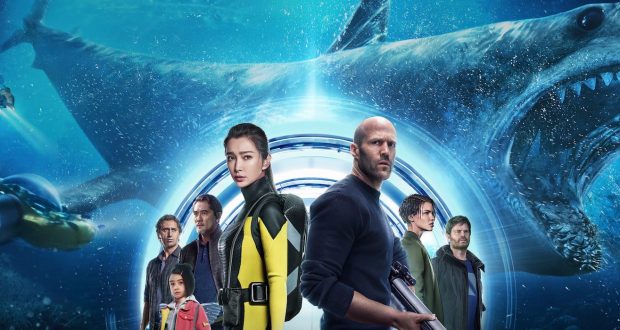 I’d wager that, if you’ve seen any of the promotional material for The Meg, you’d think that it’s more Sharknado than Jaws.

I mean, pitting a massive prehistoric shark called a Megladon (The Meg for short) against a group of humans headlined by action maestro Jason Statham does have a bit of a ‘straight to DVD’ feel about it.

But, in The Meg’s defence, the Jon Turteltaub-directed offering takes itself much more seriously than you’d imagine – and it’s actually way better than you’d probably think.

Anyway, the plot here is as simple as it needs to be. An expedition (funded by Rainn Wilson’s billionaire Morris) has discovered that the Marianas Trench is actually way deeper than mankind ever imagined.

Naturally, they send a hi-tech sub down there to have a snoop around and all appears to be going swimmingly…until The Meg makes an appearance and batters the craft into submission.

As fate would have it, one of the crew is the ex-wife of deep sea rescue expert Jonas Taylor (Statham), who has turned to a life of booze and Thai beaches after a mission that went south a few years earlier.

Anyhow, when the rescue mission is launched we’re finally introduced to The Meg in all of its glory – and it doesn’t take long for the monstrous shark to escape from its sea-bed tomb and begin terrorising the rest of the team.

As the Jaws movies and the more recent (and inferior) shark films have proved, we seem to love a good shark versus man battle on the big screen.

The Meg does its best to tell you all of the science behind its star attraction – and should be commended for doing so – but you’ll never quite be able to believe that the King fish could actually exist in today’s world.

However, it does boast a set of characters that are surprisingly likeable for a film in this genre. They also take the time to grieve for their fallen loved ones, something you don’t often see in movies of this type.

That’s largely because they are given the time to do so – given that The Meg is nearly two hours long. I’m always an advocate of films being as long as they need to be, but that is quite lengthy for this kind of offering.

Statham, as you’d expect, revels in the role of alpha male here and delivers exactly the kind of performance that you’d expect. His chemistry with Li’s Suyin and her on-screen daughter Meiying (Sophia Cai) is a surprise highlight, too.

Elsewhere there is a typically striking performance from Rose, while Kennedy brings the comic relief (although not as often as you’d expect, which is welcome).

There’s no getting away from it, The Meg is big and very dumb. It won’t win any awards for storytelling or originality, but it’s certainly a fun time. The action is plentiful and enjoyable too, but it’s far from a gore fest.

So, while The Meg doesn’t really reach the heights of the original Jaws films, it’s perhaps the best of the rest – and wipes the floor with Sharknado, et al.