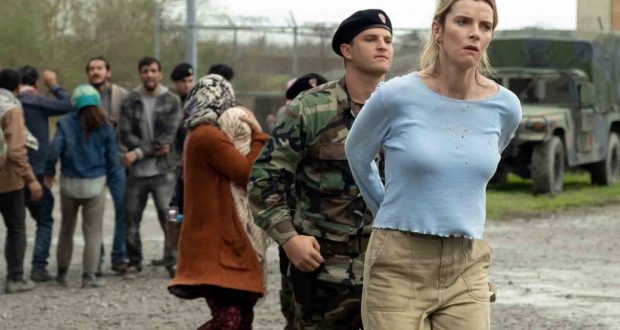 STAR TURN: The excellent Betty Gilpin (right) steals the show as Crystal in The Hunt.

At a time when the world seems a very scary and serious place, The Hunt serves as a very welcome escape from reality.

Produced by Jason Blum, written by Lost alumni Damon Lindelof and Nick Cuse, and directed by Craig Zobel, it’s a politically charged action offering that enjoys playing with the audience before reaching a very satisfying conclusion.

Feeling like a modern day Hunger Games, it’s a film that explores just how detached from reality society’s elite are as they round-up seemingly insignificant people and hunt them for sport.

It’s actually a very difficult film to review without giving too much away, with the film revelling in pulling the rug from under the audience during an explosive opening act that delivers gore and laughs in equal measure.

You’ll meet numerous side characters who you may presume will take centre stage of proceedings, given that no recognised ‘big name’ is attached to the project.

Beautiful women, strapping men and war heroes will all come and go until the true nature of the story is revealed – and it’s quite a ride.

They are all drugged and essentially placed onto the battlefield, even handed weapons, as ‘liberal elites’ take pot shots at them from afar and attempt to deceive them from up close.

Familiar faces such as Emma Roberts (American Horror Story), Justin Hartley (This Is Us), Betty Gilpin (GLOW) and Ike Barinholtz (The Mindy Project) are among the stars here, as well as a big name that I won’t spoil.

The performances are largely impressive across the board, with Gilpin in particular giving off strong vibes of Jodie Comer’s memorable showing as Villanelle in Killing Eve.

Her turn as Crystal is most compelling of those you’ll meet throughout the quite frankly outrageous events of the 1.55hrs running time.

More intelligent than you’ll expect but as ultra-violent as you can imagine, it’s hard to argue that The Hunt doesn’t serve as excellent escapism.

Sure, we’ve seen this kind of film before and you’ll struggle to believe what you’re watching at times, but I largely enjoyed it.

Perhaps the final act, although very enjoyable and largely satisfying, shifts tone a little too much and loses its way, but it’s hard to fault what comes before in terms of entertainment.

At a time when cinemas are struggling to get numbers through the door due to the coronavirus pandemic, it’d be a shame if The Hunt bombed at the box office.

If you’re happy to brave a trip to Boston Savoy, this is a good reason to leave your home and (safely) support your local cinema at a time when they need your support more than ever.