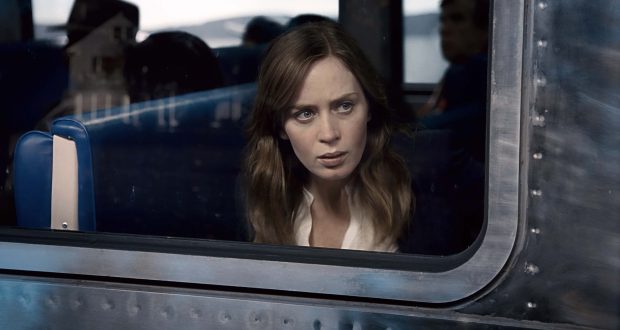 WHAT DID SHE SEE? Emily Blunt stars as troubled Rachel in the big screen adaptation of popular novel The Girl On The Train.

As somebody that doesn’t read a lot of books, the big screen adaptation of Paula Hawkins hit novel The Girl On The Train only really appeared on my radar a few weeks ago.

The trailer grabbed me as this year’s answer to Gone Girl, a thriller with a killer twist that I really enjoyed back in 2015.

The Girl On The Train (TGOTT), directed by Tate Taylor (The Help), does have a similar immersive feel to David Fincher’s offering and also has a twist up its sleeve, but doesn’t quite hit the same heights as a thriller it’s sure to be compared to.

It’s pretty obvious from the start that the always excellent Emily Blunt (Edge Of Tomorrow) is going to be the best thing about TGOTT, something she’s making a bit of a habit of doing lately.

She shines as emotionally unstable alcoholic Rachel, who has seen her life turned upside after her husband Tom (Justin Theroux – The Leftovers) cheated on her and ultimately left her for estate agent Anna (Rebecca Ferguson – Mission Impossible: Rogue Nation).

She bizarrely rides the train to and from New York every day, knowing that the line passes by her old house (which is now inhabited by Tom, Anna and their baby).

The journey also takes Rachel past the residence of Megan (The Magnificent Seven’s Haley Bennett) and husband Scott (Luke Evans – Fast and Furious 6) – and she becomes a little obsessed with their seemingly perfect existence without even knowing them personally.

The plot really kicks in when Rachel sees Megan in the arms of therapist Kamal Abdic (Edgar Ramirez – Point Break 2015).

This pushes Rachel over the edge and she quite literally spirals out of control in a drunken rage, with the intention of confronting Megan. However, a drunken blackout causes her to lose parts of the night – and when Megan is reported as missing, she’s naturally the number one suspect for the police.

It may sound confusing, but I found that first act incredibly immersive. With the story (as in the book) told via the differing perspectives of the three lead women, you really get to know all of the main players in the plot.

It is fair to say that the story unfolds relatively slowly as it builds towards its conclusion (and much awaited twist), but I really didn’t mind that.

What did bother me a little was the twist itself, which I saw coming a mile off.

That’s not to say it didn’t work, but if you pay attention you’ve got a good chance of guessing a least one part of the surprise.

Where TGOTT delivers is with its cast. Blunt is one of my favourite leads at the moment – and I include both men and women in that.

She’s brilliant as Rachel and 100 per cent steals every scene she’s in.

Equally, Ferguson is an actress whose stock is on the rise – and her turn as Anna is a strong one once again.

Bennett puts in an eye-catching performance as Megan too, although it’s fair to say that the three women fall into pretty stereotypical brackets.

With that in mind, you may find yourself not liking them as characters – which naturally harms the pay-off.

Theroux, Ramirez and Evans are solid on the male front too, while there’s a pleasing cameo from Friends star Lisa Kudrow at one point.

Don’t expect perfection, but TGOTT is a solid thriller and well worth a watch.

Voice Verdict: 7/10
+ Emily Blunt
+ Rest of the cast is strong too
+ Engaging, immersive story
– Twist was a little too obvious