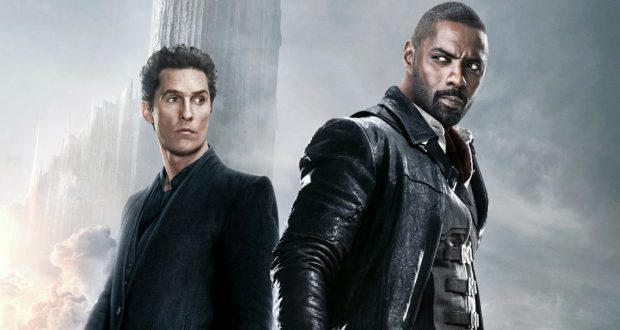 I was expecting great things from The Dark Tower.

Based on the acclaimed series of books from celebrated author Stephen King, many fans have described it as his best work.

But there lies the problem, with director Nikolaj Arcel (The Girl with the Dragon Tattoo 2009) attempting to crowbar eight books worth of material into around 95 minutes of film.

What we’re left with is a movie that plays out like the gand finale to a series, which is pretty odd considering the film stands alone.

At face value, The Dark Tower has all of the vital ingredients for a fine film.

With the always excellent Idris Elba and Matthew McConaughey as the leads and preventing the apocalypse being the goal, what’s not to like?

The premise of the film is that The Dark Tower stands tall in the centre of the universe, fending off what can only be described as hell spilling over into the different versions of earth.

Naturally, McConaughey’s Walter – a terrifyingly evil sorcerer – wants to take down the tower and usher in the apocalypse (sadly I can’t tell you why, as I have no idea). He and a dreadful group known as the Low Men – a race who live among the humans by awkwardly wearing our skin – snatch up young children who display shine (psychic abilities to you and I) in a bid to use the power of their mind to destroy the tower.

One child of interest is Tom Taylor’s Jake, who is considered crazy by his mum and fed-up step-dad.

In reality, Jake is having dreams that depict Walter and his bid to destroy the tower, making him one of the only humans on the modern day version of our earth to understand the bigger picture.

He also has visions of Elba’s Roland, a Gunslinger who has a serious vendetta against Walter.

So, when the Low Men come looking for him, Jake launches an audacious plan to travel to Roland’s Mid-World and help him hunt Walter down.

However, with Roland consumed by revenge and now shirking his duty to protect the tower, Jake finds himself in deep trouble.

If I’ve lost you, I’m sorry. That’s because, frankly, I was left pretty bemused by The Dark Tower. The main cast deliver good performances, with Elba suitably awesome as the gun-toting Roland and McConaughey eerily evil as a sorcerer who is able to kill people by simply saying “stop breathing”.

The story is all over the place, though. I have no idea what The Dark Tower was actually protecting, why it was at the centre of the universe, who put it there and, most importantly, why on earth Walter wanted to destroy it.

I’m sure King’s books explained all of this, but it still felt like watching the final film of an epic trilogy without having seen what happened beforehand.

It’s a scandalous oversight by all involved and ruins what could have been a fine film.

What we’re left with is an entertaining mess. I enjoyed much of the film, but it is impossible to overlook the obvious plot holes – making this one of the year’s great disappointments.

CAPTAIN UNDERPANTS (U)
10am (daily)