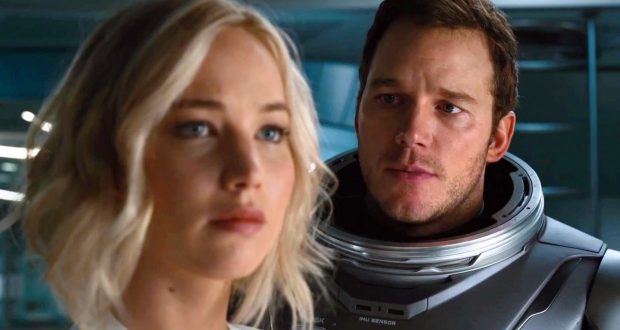 It was hard not to be seduced by the brilliant trailer for Passengers.

Chris Pratt and Jennifer Lawrence are two of the top actors in the business right now – so putting them in a sci-fi setting was always going to be intriguing for film fans.

As it turns out, the Morten Tyldum-directed offering is one of the more difficult movies I’ve been tasked with reviewing.

That’s because the film focuses largely on a choice made by one of the characters quite early in the film – and discussing that would serve as a major spoiler.

I’ll do my best to dodge the subject by being a little economical with the truth, which I’m sure you’ll thank me for if you’re planning on seeing Passengers at the cinema.

Anyway, the plot focuses on a space journey from Earth to a new colony planet called Homestead II.

All of the crew and passengers are put into induced hibernation, with the journey taking 120 years.

However, both mechanical engineer Jim Preston (Pratt) and journalist Aurora Lane (Lawrence) find themselves awake 90 years before reaching their destination.

And, with no way of returning into hibernation, they’re essentially marooned in space. Saying that, having a ship that is stocked for thousands of people has its perks – and the pair do manage to put their perilous plight behind them.

They do have robot barman Arthur (Michael Sheen) for company, too.

But there is underlying danger for the pair, with the problems that saw them awoken from their slumber manifesting in differing ways as the film progresses.

Passengers is a beautiful film that also boasts an impressive soundtrack.

It’s held together by stellar performances from Pratt and Lawrence, who are perhaps among a small group of actors that could pull this off.

As intriguing as the plot is, holes do appear later in the film. Things do go a little “Hollywood” at times, too, which is a shame.

The earlier-mentioned huge choice made by one character looms large here – and it does feel weakened by later events.

But Passengers is still a solid watch, especially in 3D.