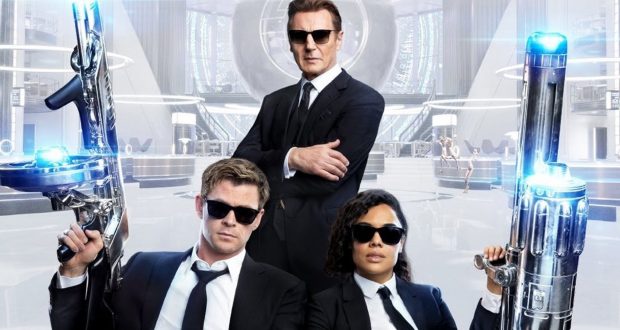 Of all the film franchises that I enjoyed growing up, I didn’t expect Men In Black to be handed a reboot.

The 1997 original was great fun at the time and, while the two sequels never quite reached those heights, it’s a film most look back fondly on.

Men In Black International does its best to re-tread the famous footsteps of Will Smith and Tommy Lee-Jones, but never quite manages to recapture the magic despite seemingly getting the casting bang on.

Sure, there are big guns, flying cars and humorous aliens, but the plot comes up short and, sadly, it just isn’t all that funny.

The main story follows Molly (Tessa Thompson), a young girl obsessed with both aliens and the Men In Black (MIB) after witnessing her parents being neuralyzed (you know, that flashy thing) when she was a child.

While we saw Smith’s Agent J actively recruited in the original, here she literally walks in the front door and asks for a job before becoming Agent M.

Her new boss Agent O immediately tasks her with rooting out a suspected mole in the MIB’s London base, so she’s sent there to poke around.

It’s there that we meet Agent High T (Liam Neeson) and the battle-weary Agent H (Chris Hemsworth), who are held in the same high regard as Smith and Lee-Jones’ characters due to a previous world-saving mission of their own.

Of course, M soon teams up with H and the pair bid to save the world again, with mixed results.

Along the way we’re introduced to a few memorable side characters – including Rebecca Ferguson’s villainous Riza, a pint-sized alien called Pawny (voiced by Kumail Nanjiani) and a few voiced by Kayvan Novak of Facejacker fame.

All play solid roles, but it just felt like something was missing overall.

Of course, there are a few exciting scenes involving inter-galactic weapons and hi-octane action.

But there’s nothing massively new here, which is perhaps what set the original apart from the rest.

I like Hemsworth and Thompson – and both have great chemistry thanks to their past work in Thor: Ragnarok and Avengers: Endgame.

But the script somehow allows their interaction to fall flat, with only a couple of laugh-out-loud moments.

Likewise, Neeson and Thompson are a little under-utilised and never really need to flex their muscles.

I’ll not drop any spoilers, but there’s also a pretty sizeable twist that you’ll likely telegraph a mile off.

Don’t get me wrong, MIB International is a solid popcorn fare and looks good on the big screen.

But it’s hard not to feel a sense of disappointment when the credits roll, with a strong cast sadly wasted in what looks like being the MIB’s final outing.